Batman: Arkham City
The Abramovici Twins are a pair of enemies that were found in Batman: Arkham City. They were conjoined twins from the USSR who were picked up by the Joker due to their odd condition. The Joker had the two separated into Mr. Hammer and Sickle to work for him because of their fitness levels. Preceeding the events of Arkham City, Sickle left the Joker and went to work for the Penguin instead.

The Abramovici Twins were born in a small Siberian village, and their father, Andrei, was a poor shoe-maker. Their mother died unfortunately during labor, which caused Andrei to resent his conjoined sons. Andrei tried to drown them in a river near the village, but when he saw a wolf-mother playing with her two pups nearby, he remembered his responsibility as a parent, and hindered himself. But Andrei had neither the strength nor the will to raise his sons, so he abandoned them by the doorstep of a local circus. The twins grew up as part of a freak show, but no one knew about their monstrous strength until they killed a tiger that attacked the audience. They soon received the nicknames "Hammer and Sickle" because of their individual weapons. The Joker heard about them and used Harley Quinn to try to recruit them for his gang. When the circus-owner refused to sell them, either Joker or Harley killed him with a knife and transported the twins to Gotham City.

After he set up his base of operations at the Steel Mill in Arkham City, Joker realized that the twin's conjoinment hindered them during battle, so he hired Hush to surgically separate them. After not thinking that he needed more than one giant-sized henchman, Joker ordered Harley Quinn to get rid of Sickle. Later, Penguin found a one-armed man dumped outside his doorstep with a note that mockingly said "wingless bird". Sickle was brought in and recruited as a member of Penguin's Gang.

When Batman infiltrated the Steel Mill to interrogate Joker about Protocol 10, Mr. Hammer tried to stop him, but was defeated.

Later, Batman attacked Penguin's base at the Museum in order to free Mr. Freeze. Sickle ambushed and assaulted him in the Museum War Room, but he suffered the same defeat as his brother.

After Joker's defeat and death, the twins could be found in the Steel Mill at the Assembly Line sitting together in a secluded room. The twins addressed how they never should have parted ways to begin with, decided to work together again, and believed themselves to be unstoppable as a duo.

Both of the Abramovici Twins were sewn back together and Sickle's mouth stuffed with straw by Scarecrow to send Penguin a message. 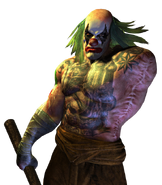 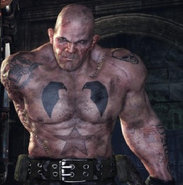 The Abramovici Twins sewn back together again.
Community content is available under CC-BY-SA unless otherwise noted.
Advertisement