Alfred Pennyworth, after a varied career, was employed as the Wayne family's butler when Bruce Wayne's parents were killed. Alfred raised the young orphan and reluctantly aided him in his quest to become Batman. His many skills, ranging from cooking to medicine - made him Batman's staunchest ally, along with a formal demeanor that grounded the Dark Knight and deflected those who might otherwise suspect Bruce Wayne's true identity. Alfred showed that he cared for Bruce as his own son, one sign of this love being Batman's ally. Alfred stayed with his adopted son without hesitation and continued to aid him in his war.

In his early life, Alfred claimed to have been an accomplished actor before he signed on to be the Wayne family's butler, but records hinted at a history with military intelligence and medical training. Being an actor could have been a cover, or acting could just be a very useful skill for an intelligence officer to have. Several rumors would come to light about Alfred's past. One rumor suggested that Alfred had replaced his father as the fourth generation major domo to the English Queen. Still another rumor posited the possibility that Alfred had been a member of MI6. Both rumors could not answer the question of why someone working for either British royalty or British Intelligence would be swayed away to a career as a butler in the Wayne family. Regardless of the truth, Alfred was known to have been employed as the Wayne family's butler some years before the birth of Bruce Wayne.

After the Waynes' death, Alfred took young Bruce under his wing and raised him as a father would. When Bruce had decided to fight crime as the masked vigilante Batman, Alfred was disappointed with this, thinking that Bruce had gone in over his head and he didn't want him to be killed in action.

Alfred appeared in Batman: Arkham Origins. His and Bruce's relationship was strained at that point, with Alfred regarding Batman as a foolish use of Bruce's time, while Bruce saw Alfred as a domineering would-be father figure. As Batman left for Blackgate Prison to stop a riot there, Alfred casually asked if he was skipping out on Christmas dinner. When Batman returned after he learned that Black Mask had hired eight assassins to kill him, Alfred pointed out that since only the two of them knew the Batman's identity, it'd be best if Bruce stayed home. However, Bruce reasoned that the assassins would kill innocents to draw him out, so he had to go and stop them.

While Batman was fighting Bane, Alfred contacted Captain Gordon because he was afraid that Bruce would die in the battle between him and Bane. As the game progressed, Alfred became increasingly frustrated with Batman's cause, and continuously attempted to convince him to stop. After Batman defeated Firefly, Bane attacked the Batcave, beat Alfred within an inch of his life, threw him into the depths of the cave, and left. But Alfred was saved by Bruce before he died, through reviving him with the Electrocutioner's Shock Gloves. He then changed his mind drastically about Bruce's crusade and realized that Gotham truly needed Batman. However, Bruce was losing faith in his crusade. Alfred consoled him, reminding him that he was a man, not an island. Bruce finally accepted that he needed allies, leading to Batman teaming up with Gordon to retake Blackgate from the Joker. Afterward, as Batman went out into Gotham to recapture escaped inmates, Alfred promised to keep their Christmas dinner warm for themselves in the morning.

During New Year's Eve, Alfred helped with serving the guests at Bruce's New Years Eve Party at Wayne Manor. When Mr. Freeze arrived, Alfred appeared to defend himself with a fire stoker from the Penguin's Henchmen and got knocked out by a thug with a vase. After the thugs were knocked out by Bruce, he helped Alfred get up. Alfred stayed with the guests while Bruce searched for another entrance to the Batcave. Alfred was also in radio contact with Bruce.

Batman stayed in contact with Alfred until Penguin's thugs interrupted Alfred, took him hostage, and contact was lost. With the mansion burning, Batman found Alfred and guests held hostage. Batman took down the thugs, and saved Alfred and the guests.

Afterward, Alfred remained behind at the Batcave, prepped the Extreme Environment Suit and ran tests on it at Batman's request before he deployed it. After Mr. Freeze and Ferris Boyle were subdued and arrested, Batman gave Alfred permission to turn in for the night while he patrolled South Gotham for a little while longer.

Alfred informed Batman that Arkham Asylum had a yellow alert that night.

Alfred´s bio could be unlocked by scanning a golden plaque at the Medical Facility. He didn't make any other appearances.

Alfred was Batman's main person for communications while he was in Arkham City, who talked to him mostly and offered advice before Oracle came along into his communications system. Alfred was the one who persuaded Batman to go to Wonder Tower and stop Protocol 10 instead of being uncharacteristic and save Talia al Ghul first, which would have put the lives of thousands of people not just in Arkham City, but also in Gotham, in danger. While Batman was stopping Protocol 10, Hugo Strange sent a group of TYGER Guards to Wayne Manor to find out the rest of Batman's secrets as well as kill his loved ones, which put Alfred in danger, only for him to be rescued by Robin and Nightwing, who easily defeated the TYGER Guards.

Alfred was stationed in the Batcave when Scarecrow reappeared in Gotham. When Batman confronted Scarecrow at Ace Chemicals, he contacted Alfred, warned him that Scarecrow knew about Barbara, and had sent the Arkham Knight after her. Alfred tried to raise Oracle, but he received no response. That allowed Scarecrow to get away and lock Batman in the central mixing chamber. Batman then began to apply the neutralizing agents to the Fear Toxin bomb to diminish the blast radius to the proximity of the facility. Alfred pleaded with Batman to pursue Scarecrow, and reasoned that the villain knew that this was how he would respond. Ultimately, Batman managed to escape the chemical plant before it was destroyed. He then informed Alfred that he was exposed to the toxin, but claimed that he was unaffected, before he advised Alfred to secure the Batcave if the Arkham Knight should come for him as well.

Alfred continued to assist Batman throughout the night against Scarecrow while trying to uncover the Arkham Knight's identity. Batman believed that the Arkham Knight had a connection to Joker, Arkham Asylum, or Arkham City, and had Alfred search through the various personnel, inmates, etc. that were involved, but Alfred could find no person that could accurately fit the Arkham Knight's mantle. Alfred contacted Batman to find out what was happening, and Batman informed him that Barbara was dead. Shocked of her death, Alfred revealed to Batman that the Cloudburst was a dispersal device that Scarecrow planned to flood his Fear Toxin all over Gotham, but Batman was still depressed over Barbara's "death". Batman came to his senses for Ivy's help to destroy the Cloudburst. After Batman arrived at Panessa Studios, Alfred informed him when he would tell Robin about Barbara's death, but Batman wasn't ready to tell him. Eventually, while trying to rescue Commissioner Gordon, Batman discovered the Arkham Knight to in fact be the thought-deceased Jason Todd, to Alfred's complete surprise.

After Batman was abducted by Scarecrow, though he managed to defeat him, it cost him the secret of his identity. Having planned for such an occurrence, Batman told Alfred to prepare The Knightfall Protocol. After cleaning up Gotham one last time, Batman, known to the world as Bruce Wayne, returned to Wayne Manor, where Alfred greeted him and assured him that all was ready. Bruce entered the manor, and Alfred closed the doors, moments before a large explosion tore open the structure and (presumably) ended the lives of both Bruce and Alfred.

Alfred is well-mannered, polite, formal, and sarcastic. As the butler of the Wayne family, Alfred displays impeccable sophistication and formality, speaking towards others with respect in an articulate manner such as addressing Bruce as "Master Bruce" or "sir". While assisting Batman from the Batcave, Alfred is extremely tech-savvy, relaying information and on the same level, his hacking abilities match those of Oracle.

His greatest trait was his devotion to the Wayne family. He raised Bruce Wayne, who was orphaned after his parent's death, and became very protective over him. Because of this, he initially saw his desire to ridding all crime in Gotham as a fool's errand and was pointlessly putting his own life at risk. After Bruce saves him from death, recovering from Bane's attack, he began to understand the need for Batman in Gotham, even urging him to go instead of being at his bedside. His love and loyalty for Bruce were so strong, he desperately encouraged him to locate Mr. Freeze's cure in Arkham City, and ignore the other plots occurring.

Despite this, Alfred has been more pragmatic at times and is capable of thinking beyond for the greater good. For example, he refused to help Batman track Talia while Protocol 10 was occurring and encouraged him to locate the Cloudburst despite having previously been depressed over witnessing Barbara Gordon's death.

"After a varied career, Alfred Pennyworth was employed as the Wayne family's butler. When Bruce Wayne's parents were killed, Alfred raised the young orphan and reluctantly aided him in his quest to become the Batman.

Alfred encountering a giant bat in the Batcave in Arkham Origins. 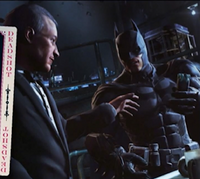 Alfred with Batman in the Batcave in Arkham Origins.

Alfred in Assault on Arkham. 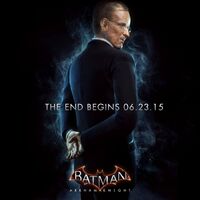