Amusement Mile is a district in Old Gotham that was built during Gotham's industrial boom. Over time, the district's amusement park fell into ruin due to bankruptcy and flood damage. Eventually, Amusement Mile became part of Arkham City, the mega-sprawling prison, as disputed territory between the prison's gangs. Most of the area was flooded due to land subsidence weeks before the opening of Arkham City, but the buildings still stood.

Major flooding covered most of the land below five stories in the Mile, leaving it in a state of urban ruin.

After his wife was held hostage by The Joker, Mr. Freeze took refuge in the GCPD Building of Amusement Mile and renovated it to function as a sub-zero laboratory to support his research into the Joker's and Batman’s unique disease.

Joker makes this area his base of operations and it is his turf in the giant turf war taking place inside Arkham City. The Joker, the Penguin, and Two Face are the major fighters in this war. Hugo Strange sees this as an opportunity for them to kill each other. He supports the war by giving all the gangs guns, armor and later, shields. On information from Hugo Strange, Penguin sends a group of his henchmen to infiltrate the old GCPD Building to locate and destroy Freeze's research into finding a cure for the Joker's blood poisoning. Batman intercepts them and interrogates Freeze's whereabouts from the last henchmen standing.

As Batman leaves the building, Penguin sets off a bomb destroying the bridge connecting Amusement Mile and Park Row, leaving Penguin's own men stranded in the Mile with the bloodthirsty horde under the Joker's employ.

Mr. Freeze returns to the lab several hours later and, after his battle with Batman, uses his weaponry to to block off the doors, windows, vantage points and grates of the GCPD Building with ice. He also creates a giant ice bridge from the building to the Industrial District in order to find his wife, Nora Fries.

On top of the bridge Scarecrow's Mask could be found and, if scanned, it would solve a Riddle. 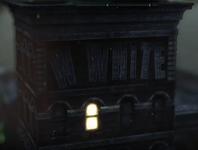 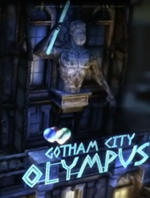