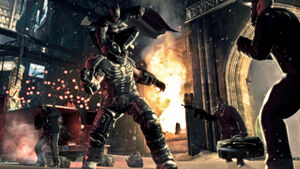 Armored Henchmen are enemies equipped with armor that protect them from most attacks. They are usually seen with regular henchmen and rarely appear by themselves. One or two Armored Henchmen usually appear in a group.

They belong to various factions across Gotham City, save Shiva and the League of Assassins.

The only way to defeat the Armored Henchmen is to knock him down and Ground Takedown the thug, or use the Beat Down technique.

The Armored Henchmen are first encountered at Blackgate Prison. They then appear frequently in Gotham in various places and events.

The Armored Henchmen are first encountered at the Museum and then appear in Arkham City throughout the game. They are involved in various schemes, such as The Joker's plan. Some of Joker's armored henchmen appear with Harley Quinn in Harley Quinn's Revenge.

The Armored Henchmen don't appear Arkham Knight and are instead replaced by Brutes. While they fulfill the same purpose (they are immune to normal attacks), they are much more difficult to deal with, as they can't be knocked down, attack faster, countering them deals no damage to them, and they are immune to the Fear Multi-Takedown. While a Beatdown can still be used to take them out in one go, those employed by the Arkham Knight's Militia require two finishers to keep down. Dual Play Takedowns can be used to knock them out with a single move. In Predator, they are replaced with Minigunners.

In combat, they can be taken out with Beat Downs, special combo takedowns, ground takedowns, Blade Dodge Takedowns, and damage caused by Titan Henchmen. In predator, they are vulnerable to counters, Reverse Ledge Takedowns, ground takedowns, and most loud takedowns; they are immune to Silent Takedowns, though. Any Remote controlled Gadget can potentially knock them off walkways if the gadget is moving at full speed and hits the target from behind. Anything else that can knock them off walkways (Explosive Gel, Batclaw) can be used to take them down. If the character has access to the Disruptor, a mine could be blown up while they were near them.

Like most enemies, the Inverted Takedown can be performed to instantly take out an Armored Henchman. The Remote Electrical Charge can be used to send them flying; if they fall off a walkway this way, they are knocked out. In addition, in Arkham Origins, they can be knocked out with a glue grenade takedown, tightrope takedown, and zipline takedowns.

Caltrops can be used to make Armored Henchmen trip, and left open for a ground takedown. Using Catwoman's Whip to trip them in predator also leaves them on the ground and vulnerable to a takedown. Catwoman can also perform a ceiling takedown on Armored Henchmen if she is on the ceiling and they are standing above her.

Snap-Flashes can be used to make Armored Henchmen vulnerable to a ground takedowns.

Wrist Darts, if shot into their heads, instantly take Armored Henchmen out. If they are hit anywhere else, they can be knocked over and became vulnerable to a ground takedown. In addition, Electrical Blast can knock them over if it is performed from sufficient height.

Deathstroke does not have any special ways of taking out Armored Henchmen, but anything in the "In general" section can be used. Note that his Proximity Mines are not capable of performing an exploding wall takedown.

Again, this character has no unique takedowns to perform, but the moves in the "In General" section do the trick.

Joker's Armored Enforcer in the Overivew Bar at the Royal Hotel in Arkham Origins.
Add a photo to this gallery

Retrieved from "https://arkhamcity.fandom.com/wiki/Armored_Henchmen?oldid=87746"
Community content is available under CC-BY-SA unless otherwise noted.