Bane's Henchmen are members of Bane's Militia in Batman: Arkham Origins. Their second-in-command is Bird.

Bane's Henchmen appeared during the Christmas' Eve Incident, and worked for Bane and his Lieutenant, Bird.

One of Bane's Venom Henchmen, Andrew Carter, killed an unknown victim at Amusement Mile as part of an initiation into the group. Batman located Carter at Park Row and interrogated him about the murder at Amusement Mile and apprehended him for GCPD.

By the end of the incident, Bane and Bird were both sent to Blackgate Prison, and many Bane's Henchmen were either killed or arrested.

All of Bane's Henchmen were apprehended before the New Years Eve Incident and put into Blackgate.

At some point after Arkham Origins, Bane somehow broke out of prison, and reassembled his militia with Bird and units of Elite Henchmen. Together, they fought a series of gang wars against The Joker and his henchmen.

- Flying dron with poor durability which is able to shoot rockets.

Bane's Henchmen usually wore masks similar to the one Bane used during the incident, dark jackets, dark pants and

dark boots. Some of them used Venom, and Batman was required to destroy the machine they utilized to take them down. 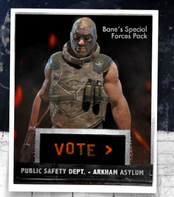 Bane's Henchmen 2
Add a photo to this gallery

Retrieved from "https://arkhamcity.fandom.com/wiki/Bane%27s_Henchmen?oldid=85001"
Community content is available under CC-BY-SA unless otherwise noted.