The Baseball Bat appeared in Concept Art and in the demo of Batman: Arkham Origins. It was first used when a Mobster was torturing Warden Joseph until the Mobster tried to swing at Batman, but Batman broke it in half.

Some inmates would try to hit Batman during the events of Batman: Arkham City. Harley Quinn used her baseball bat and smacked Batman with it in the first few hours of the game.

Harley Quinn used a customized Baseball Bat during her attack on the Blüdhaven Police Department.

Thugs, once again, were seen using them, but that time, Batman could too. If one was dropped on ground, Batman could pick it up for increased damage and to bypass some enemy weapons. They broke after using them for some time.

The playable version of Harley Quinn used her custom Baseball Bat during Takedowns and Beatdowns. 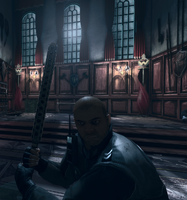