The Bat-Signal is a distress signal device that appeared in the games:Batman: Arkham Asylum, Batman: Arkham City, and Batman: Arkham Knight. It is a specially modified searchlight with a stylized symbol of a bat attached to the light so that it projected a large Bat emblem in the sky or on the buildings of Gotham City. The signal is used by the Gotham City Police Department as a method of contacting and summoning Batman to their assistance in the event of a serious crisis and as a weapon of psychological intimidation to the numerous villains of Gotham.

A bat icon appeared in the sky as a waypoint marker, but it was not the Bat-Signal, because it didn't exist yet.

At the beginning of the story, when Captain Gordon contacted Batman, they briefly talked of the need for an easier way to get his attention. At the end of the game, Gordon appeared to have found it as the Bat-Signal lit up the sky.

The Bat-Signal's light could be seen in the sky while Batman was taking the Joker to Arkham Asylum in the Batmobile. In the last Nightmare with Scarecrow, the Bat-Signal appeared with a Scarecrow symbol on it due to the Fear Toxin, and the Bat-Signal was a way that Batman found to escape the Nightmares.

The Bat-Signal could be seen on the rooftop of the old GCPD Building at Amusement Mile, but it was turned off. The Bat-Signal existed as a game interface component, that was positioned to guide players to locations in very much the same way as the 'actual' Bat-Signal existed to summon Batman to an area. It was also the answer to a riddle: "Always a shining example of justice? Not if you ask me."

The Bat-Signal was used by Commissioner Gordon to contact Batman at the start of the story. After he stopped Scarecrow and caught all of the villains on the loose, Batman destroyed the Bat-Signal as a part of The Knightfall Protocol.

During the GCPD Lockdown, the Bat-Signal was still broken upon the GCPD rooftop, and it was revealed that when Batman originally ordered the Bat-Signal, he had a self destruct option built into it, with Lucius Fox never asking why. After Nightwing returned Penguin to the GCPD Lockup, Aaron Cash, presumably acting as GCPD Commissioner, offered to repair the Bat-Signal and turn it into a Nightwing Signal, but Nightwing declined the offer, and said that [Nightwing in Gotham] wasn't permanent. 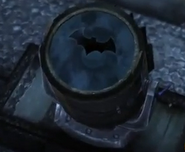 Bat signal destroyed
Add a photo to this gallery

Retrieved from "https://arkhamcity.fandom.com/wiki/Bat-Signal?oldid=80705"
Community content is available under CC-BY-SA unless otherwise noted.