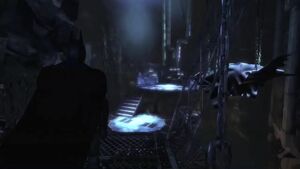 Built as a precaution should he ever be separated from the primary Batcave under Wayne Manor, this "Batcave" is one of many "satellite-caves" established by Bruce Wayne as a base-of-operations within Gotham City. That cave, located directly beneath Arkham Asylum, would prove itself useful when Batman became trapped on Arkham Island during the Arkham Asylum Incident.

Suspended over an abyss, that cave possessed its own Batcomputer, an emergency Batwing, and various utility tools to complement the tools that Batman already carried.
The cave was accessible from various points, and possessed a security entrance at the base of Dead Man's Point (A cliff on the island that was popular for suicides), and access to Arkham Island's underground Caves and the Old Sewer System.

At an unknown period of time, Batman discovered a cave system beneath Arkham Island after saving an inmate from falling to his death. He established a "satellite-cave" within it to serve as an emergency base of operations for rest and re-supply. Batman kept that Batcave a secret even from his most trusted allies.

After he discovered that Dr. Penelope Young might be involved in creating a formula by using Venom as a base, Batman contacted Oracle to investigate while he made his way to the satellite-cave via Dead Man's Point.
Once in the cave, Batman accessed the Batcomputer and deduced the Joker's plan to use Dr. Young's formula to create an army of Bane-like monsters. Batman returned to the surface, and later returned to the cave to create an antidote for the formula, named Titan, just as the Joker injected Poison Ivy with it. Ivy's powers over her plants increased dramatically, and, in her attempt to strangle Arkham Island in colossal vines, penetrated and destroyed the Batcave.

After both Arkham Asylum and the island were shut down and turned into TYGER's HQ, Batman likely abandoned this Batcave.

Batman approaching the Batcomputer in the Batcave.

The Batcave's Batcomputer making the Antidote to the Titan Formula. 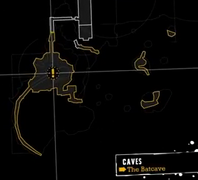 The Batcave's location on the Arkham Asylum Map.