Batman's Utility Belt was one of Batman's most iconic and handy gadgets. It was a gold belt with several pockets and was where Batman stored his gadgets.

As part of his vow to seek justice for his parents' murders, Batman would never use a gun. The Utility Belt is merely a complement to Bruce Wayne's training and range of skills. Assembled in the Batcave, the utility belt had magnetized impact-resistant pouches. Its buckle featured an easily rotating locking mechanism, to which various devices were attached. Bruce Wayne borrowed and assembled many of his gadgets from Wayne Enterprises and the Batcave like the Grapple Gun, Explosive Gel, Detective Mode and Smoke Bomb.

It was a grayish-black utility belt that was worn around the waist of Batman's prototype Batsuit even in his early days as a vigilante. Batman used that belt to carry all the gadgets that he used, found, and came across.

After the Joker took over Arkham Asylum and locked Batman in with him, Batman used his gadgets to find his way around. The Utility Belt stored: a somehow infinite supply of Batarangs, one canister of Explosive Gel, the Line Launcher, the Grapnel Gun, the Batclaw, the Cryptographic Sequencer, and other upgraded gadgets. All of these gadgets provided Batman with the edge that he needed to overcome his foes and defeat the Joker.

After Bruce Wayne escaped his custody from the TYGER Guards inArkham City, he contacted Alfred and requested him to send the Batsuit and his utility belt on the roof of Ace Chemicals. The belt acted the same as it did in Arkham Asylum. After Batman went in the Museum to rescue Mr. Freeze, he had to follow a blood trail from a member of the League of Assassins but before he did that he requested to have the Line Launcher dropped in Arkham City and Alfred made a joke if Batman ever considered a bigger belt. Batman did consider it but it would be too heavy and it would slow him down.

After the Joker's death, and a vengeful Harley Quinn captured Batman, her goons took his belt from him, but it seemed to have a defense system as whenever the henchmen tried to pick it up, they were electrocuted. A group of inmates hurdled around it, and were afraid to touch it until Robin came by the area and knocked them all out. Robin took the belt and gave it back to Batman after he was set free.

In the default outfit, it was colored gold. Near the end of the game, Batman temporarily abandoned the belt, however, that only affected his ability to use quickfire gadgets during one fight. 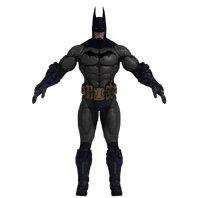 Batman with a gold Utility Belt in Arkham Asylum

Batman with a black/gray Utility Belt in Arkham Origins

Batman with an armored gold Utility Belt in Arkham Asylum

Batman: The Dark Knight Returns Skin with the Utility Belt 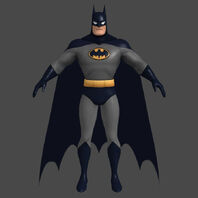 Batman: The Animated Series Skin with the Utility Belt 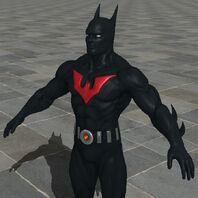 Batman Beyond Skin with the Utility Belt

Batman with a dark gold Utility Belt in Arkham City

Robin with a gold Utility Belt in Arkham City