Batman: Arkham City Lockdown is a fighting video game developed by NetherRealm Studios and published by Warner Bros. Interactive Entertainment for iOS which was released on December 7, 2011. Taking place before Batman: Arkham City, the game sees players using touchscreen controls to fight enemies one-on-one, including villains such as Two-Face, Solomon Grundy, Joker, and Deathstroke. Defeating enemies earns points that can be used to upgrade Batman's stats or unlock gadgets or costumes. The game features integration with Game Center.

Joker, Two-Face and other inmates have escaped from Arkham Asylum once again. As Mayor Quincy Sharp declares that this is the last straw and aggressively moves to push his Arkham City project through City Hall, Batman ventures to hunt down and capture the freed villains before they cause additional damage.

Batman fights Two-Face's thugs before encountering, chasing after and fighting Two-Face himself.

Batman fights Penguin's thugs through the sewers before encountering and escaping from Solomon Grundy.

Batman fights Deathstroke's thugs through the Steel Mill before encountering Deathstroke who had used the men as bait in an attempt to capture Batman in a contract for Hugo Strange only for Batman to defeat and capture him instead.

Batman fights Joker's thugs across the Gotham rooftops before encountering the Joker, who promptly starts setting off explosives in the surrounding buildings before Batman manages to catch up with him and beat him down.

When Harley Quinn kidnaps a reporter to use as a hostage to get Joker freed, Batman fights her thugs through the industrial district before encountering Harley, who releases her remaining thugs in an attempt to wear Batman down before attempting to kill the reporter herself only to be knocked down by a Batarang. After defeating Mr Hammer, Batman captures and takes Quinn to jail.

When Poison Ivy uses her pheromones to take over the Gotham Police force, Batman fights the infected policemen through the Business district. Approaching the courthouse, Batman had to fight his way through multiple police defensive lines before having to face an infected Robin. Spraying Robin with an antidote, Batman captures Ivy and returns her to jail.

This game involves the player using the touch screen in order to play. If the player moves his finger left and right he or she can make Batman punch his foes repeatedly. If a foe attempts to punch Batman, the player can slide their finger up to deflect the foe's attack. Batman can also counter foes by tapping a certain body part on the screen which will result in a takedown (or deplete a lot of their health). When Batman defeats a Gotham thug, he can advance to the next phase, facing off another thug. After defeating the last foe, the level is complete. If a foe punches Batman, he will lose some health. If the foe makes Batman lose all his health, the game is over and you have the option of trying again or quitting the game. Foes may also have an advantage of attacking Batman so that Batman can only dodge these moves rather than attack due to their red colored shield. There are a total of 3 to 4 thugs to fight in 2 stages before fighting the villain (boss) behind the crime. There are also 4 Bonus Stages which give upgrades to Batman. After the player levels up, he or she gains experience. With this experience, players can buy gadgets, physical build, combo strikes, health boosts, etc. Players can also make Batman change suits from his Arkham City appearance to his 1970s Batsuit, which one can purchase for free upon download. After the player completes the game, they can play it again on an even harder mode, where thugs and bosses are harder to beat.

The game has been updated three times since its release. The first update added more achievements and costumes, while the second and third added more areas and villains (Harley Quinn in Update 2 and Poison Ivy in Update 3). Each of these updates also added more skins and achievements, and raised the level cap.

Batman Arkham City Lockdown was met with mixed reviews, as IGN Associate Editor Andrew Goldfarb says "There’s a lot to like about Arkham City Lockdown, but there unfortunately isn’t much to love. The game is a fun way to pass the time, but lacks the fantastic story that’s made Rocksteady’s Arkham games so notable on consoles. This is Batman’s first big outing on iOS, and we can only hope that the Dark Knight’s next trip to the App Store will be bigger and better." He went on to rate it a 7/10- Good. 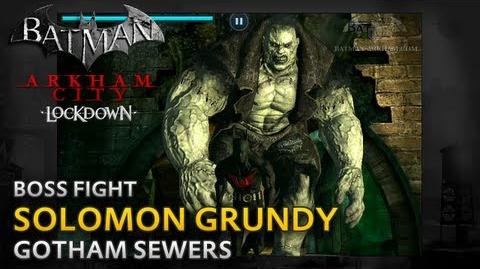