Batman Arkham Origins Mobile is an action game developed by Netherrealm Studio. Gameplay is similar to Batman: Arkham City Lockdown, but only has one cutscene. The story follows the same storyline as Batman: Arkham Origins, but in the opening cutscene assassins Shiva and Killer Croc are omitted entirely. Completing objectives and linking WBID will unlock credits for console and the Red Son Batsuit for mobile. Achieving objectives on the console edition will unlock credits for mobile and the Blackest Night Batsuit. It is available on IOS and Google Play for free.

The player may buy Batsuits or core upgrades with WayneTech Coins or WayneTech Points. Points are more rare, and some Batsuits can only be unlocked with them. After fighting in a mission, the player has a possiblity to unlock a Batsuit item, which can be used to upgrade or unlock suits. An example of a suit is the New 52 Batsuit, which can be unlocked with ingame coins. 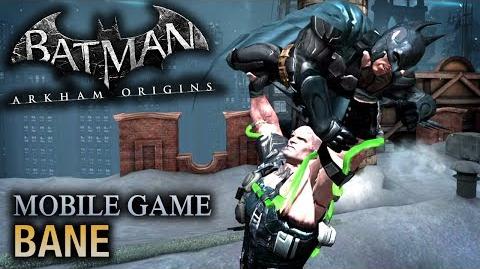