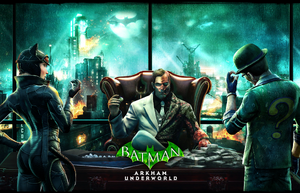 Batman: Arkham Underworld is a mobile game developed by Turbine, Inc. for IOS and Android. It is a strategy game that has the player become Gotham's most wanted criminal kingpin, facing iconic characters like Harley Quinn, Two Face, Penguin, and even Batman himself.

As of late 2017, Arkham Underworld is no longer able to be installed on any device, resulting in only being able to play if it was installed previous to it's removal on both the App Store & Play Store.