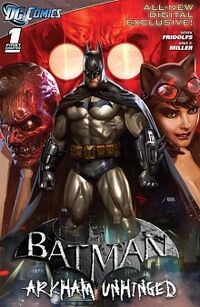 Some of the stories are known to contradict elements from the Batman: Arkham City game, one example being the actual origin of Azrael.

The story is divided into 20 story arcs.

Title: Inside Job
This story arc follows Hugo Strange trying to capture Two-Face, Batman and Catwoman, and then send them to Arkham City. It also is a prologue to Catwoman's DLC in the game.

Title: Observations
Hugo Strange has captured Two-Face and Catwoman, and now is searching for Batman. Meanwhile, Commissioner Gordon searches for evidence to bring down Strange. Batman discovers a connection between Strange and Mayor Sharp.

Title: Surgeon's General
In this issue, some inmates with several broken bones, victims of Batman, are being "interviewed" by Hugo Strange.

Title: Separation Anxiety
The Abramovici Twins' ("Hammer" and "Sickle") past and their presence in Arkham City is explained.

Title: Arkham City Sirens
Tells the story of how Catwoman, Poison Ivy and Harley Quinn worked together. When Batman arrives, his presence splits the team.

Title: Crocodile Tears
Killer Croc's origin story, explains where he came from and how he ended up in Arkham City.

Title: Vicki in Wonderland
The Mad Hatter's throwing a party...a search party, for his "Alice!" Unfortunately for her, his first invitee is Vicki Vale, still in Arkham City after the helicopter crash. Once she's intercepted by Tweedledum and Tweedledee, will she be able to RSVP "NO" or is her fate sealed? And who else unlucky enough to be on his guest list?!

Title: Operation: Kill Joker
When Penguin's assassin fails to kill Joker, the bird is looking for someone to finish the job. Deadshot is ready to fill that position...

Title: Clown Court
The streets of Arkham City are empty, silent. What will happen when Batman learns everyone's flocked to the courthouse to witness a very peculiar court case...presided over by none other than Harvey Dent, and a jury of some of the greatest villains in Gotham history?

Title: Repentance
In a place like Arkham City, a church may be little more than just another abandoned building. Nevertheless, for a group of innocents, Gotham police, and one very guilty Mayor Sharp, it's where they've come for sanctuary. A gathering mob doesn't feel that way, but a mysterious protector will show them otherwise.

Title: Eviction Notice
This Story Arc explores Black Mask's transformation from Roman Sionis to a vicious criminal, captured behind the walls of Arkham City...with some of his least favorite fellow convicts!

Title: Beloved
Batman flashes back to an early encounter with Talia, and her father, Ra's al Ghul. When she and her father save Batman's life, will the three be able to forge a partnership to save the world? And what happened that night in Metropolis between Talia and her beloved?

Title: Uninvited Guests
Wayne Manor is under siege by TYGER Soldiers, as Robin and Nightwing try to fend off the attack. With their mentor in Arkham City, is there any way they can stop Hugo Strange's last-ditch effort to destroy Batman's world?

Title: Welcome to the Slough of Despond
A wave of petty crime is sweeping Gotham, since Mayor Sharp condemned and evacuated most of the city's slums to build Arkham City. While Batman and Commissioner Gordon are forced to deal with it, they also have to cope with the appearance of a new vigilante, the "Bookbinder", on a crusade against what he sees as society's low standards of education, health, and culture.

The arc ends on a cliffhanger that promises to resume the series in the future. When asked about her plans for the story arc's conclusion, writer Karen Traviss revealed that she had planned to show more of Catwoman's life as a civilian.[1]

The cover for Batman: Arkham Unhinged #1-3(Art by Dave Wilkins)