Batman: Arkham VR is a superhero/virtual reality video game developed by Rocksteady Studios. Set a few weeks before Batman: Arkham Knight, it was released in October 2016.

Batman: Arkham VR was originally an exclusive to the PlayStation 4 until it came to Steam in 2017.

The story is set in between the events of Batman: Arkham City and Batman: Arkham Knight, and Batman: Arkham VR immerses players into the Dark Knight’s universe as they experience Gotham City through the eyes of the World’s Greatest Detective. Delving deep into an all-new Batman: Arkham mystery, those who enter this virtual reality world must think like Batman and utilize his legendary gadgets to unravel a plot that threatens the lives of his closest allies.

Mark Hamill as The Joker

Ian Redford as The Penguin

Wally Wingert as The Riddler

Kevin Conroy and Andrea Deck as Thomas and Martha Wayne

Bruce Wayne ends up having yet another nightmare about the death of his parents at the hands of Joe Chill. Before the nightmare ends, Chill tells him "that's what happens when you try to be a hero", while citing his father's dead corpse as an example.

After waking up, Bruce finds himself at the piano room of Wayne Manor where Alfred greets him. The latter informs him that there's a situation, and that he'll explain "downstairs." Before leaving, Alfred gives Bruce a key to open the piano, and after pressing the keys, he gets sent to the Batcave.

After arriving at the Batcave, Alfred told Batman that he has awful news; he lost contact with Robin and Nightwing. Using the Batcomputer, Batman finds that only Nightwing's tracker is online and that he's not responding and heads to his location by using either the Batmobile or the Batwing.

Arriving at the scene, Batman discovers much to his dismay that Nightwing was killed by a mysterious assailant. Reconstructing the crime scene, he learns that his killer knew exactly how he would fight. He also learns that one of Penguin's agents watched, but was chased away by the assailant, and wonders if Penguin had something to do with the murder.

Using the Batwing, Batman arrives silently at the Iceberg Lounge, and finds that Penguin is about to kill one of his men for failing to defuse a bomb that destroyed half of the Iceberg Lounge. Batman manages to defeat the henchmen and interrogates Penguin, who reveals that the agent was about to reveal the identity of the killer, only to be caught and killed in the explosion of the Iceberg Lounge. It is possibly caused by the same killer. Taking Penguin's advice, Batman goes to the city morgue.

Arriving at the morgue, Batman listens to reports about the explosion's victims. Analyzing the corpses with the Forensics Scanner, he finally learns that the killer's hideout is at the sewers, which is where Robin is also being kept.

Batman arrives at the sewers and while walking in, he hears speakers with Joker's voice. He finds Robin stuck in a cage, but after walking in to get him out, he gets stuck too. The two work together to find anything useful to escape the cages while holding off Killer Croc in the process with electricity. Unfortunately, after Batman releases Robin, Croc uses it to his advantage and attacks and kills Robin, much to Batman's horror.

Batman's cage suddenly turns into an elevator leading to an underground Arkham Asylum facility, where he hears screams of pain coming from the holding cells. After managing to open the door, Batman opens several cell windows with numbers 423, 424, and 425. After opening cells 423 (which contains Scarface) and 424 (which contains Victor Zsasz), he finally opens the window to cell 425 to reveal a captive Joker. As Batman attempts to leave, he finds himself locked alone inside Joker's cell which starts changing as he turns around, with letters written in blood. He then discovers much to his horror that HE was the one who murdered Nightwing, killed the agent to prevent him from telling Penguin his identity, and trapped Robin in the sewers. This all happened because Joker temporarily took control of his body, thanks to the blood transfusion he did on Batman back in Arkham City. As the horrified Dark Knight looks at the mirror and sees Joker as his reflection, the latter states that the Dynamic Duo "are together at last", making Batman realize Joker wants full control of his body, before laughing maniacally. The lights then turn off, ending the game.

Since Batman can hear numerous alarm clock noises throughout the game and hears a message on the radio earlier on the Batcave (which can be deciphered as WAKE UP BRUCE), it's heavily hinted that he is having a nightmare. These noises and messages are probably Bruce trying (and failing) to pull himself out of the nightmare.

Once Batman yet again suffers through the nightmare, he finds that Riddler has put up some puzzles around the areas in Batman's nightmare. After collecting them all and being forced again through the nightmare, Batman once again sees Joker as his reflection. Instead of taunting Batman however, Joker instead sings a mocking song about how he will permanently take over Batman's body for himself, ending with the prophetic words "Soon Bats will be gone, AND I WILL BE HERE!". The lights once again go out, causing Batman to snap out of the nightmare. 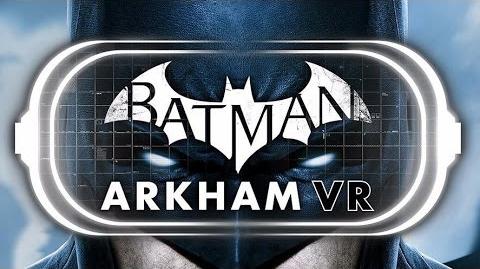