Batman: Assault on Arkham is an animated movie that was released August 2014 and is an adaptation of Rocksteady's Arkham Series. It features the voice talents of Kevin Conroy as Batman and Troy Baker as the Joker. The story takes place between Arkham Origins Blackgate and Arkham Asylum.

Based on the hit video game series, Batman must find a bomb planted by the Joker while dealing with a mysterious team of villains, called The Suicide Squad.

The Riddler is rescued from a black ops assassination and returned to Arkham Asylum after being captured by Batman. Amanda Waller then pressgangs criminals Black Spider, Captain Boomerang, Deadshot, Harley Quinn, Killer Frost, KGBeast, and King Shark to break into the hospital and finish the job. The Suicide Squad members are forced to comply by means of bombs surgically implanted at the base of their spines. KGBeast, who believes the bombs are a bluff, walks out on Waller and is killed as an example to the others.

The six are deployed to Gotham City, where Penguin has been hired by Waller to give them arms and equipment. Penguin agrees to sneak Suicide Squad into Arkham in exchange for room and board and tells them not to ask for his help again or bring Harley with them when they enter the club. Weeks before this mission after the acid burning incident Joker and Harley hijacked one of Penguin's North Refrigeration trucks which was loaded with Cobblepot's smokes and his guns and drove it into the Gotham River for a laugh. Tensions immediately arise among the squad members, particularly between Deadshot and Captain Boomerang, who resents Deadshot's assumption of the leadership role on the team. Meanwhile, Batman ransacks the city in search of a dirty bomb that Joker had possessed prior to his own incarceration in the asylum.

Harley Quinn commits noisy petty crimes in Gotham until she is arrested and returned to Arkham, at which point she stages a distraction by arguing with and apparently attempting to murder her ex-lover Joker. This distraction allows the Suicide Squad to successfully infiltrate Arkham in a variety of disguises, and proceed smoothly with their mission until Batman arrives. Batman and Black Spider duel, and Batman defeats Black Spider and switches costumes with him, joining the Suicide Squad without their knowledge. Killer Frost locates Riddler, but decides against killing him when she learns the reason she was sent to snuff him out: Riddler knows how to disable the bombs implanted in members of the Suicide Squad. Joker escapes his cell, which was weakened by Harley Quinn's earlier assault, and frees all the Arkham inmates.

The Suicide Squad agree to spare Riddler in exchange for his help, and most are able to deactivate their bombs with the use of a device intended for electroshock therapy. Black Spider and King Shark, however, are messily executed by Amanda Waller when she learns what the Suicide Squad has done, which reveals Batman's impersonation of Black Spider. Chaos spreads across the Arkham island as police sortie with super-criminals, and teamwork in the Suicide Squad collapses as Harley Quinn reunites with Joker. Joker reveals that his dirty bomb was hidden within Harley Quinn's trademark mallet, which was stored at Arkham, and that he will detonate it in the city.

The remaining Suicide Squad members frantically and separately try to escape the island, but only Deadshot is successful, while Captain Boomerang is recaptured and Killer Frost is apparently killed by Bane. Deadshot travels to Gotham City by stolen helicopter, but discovers Joker and Harley Quinn were stowing away with him. Batman arrives on the scene and Deadshot battles the Joker as Batman subdues Harley Quinn. Batman defeats Harley Quinn and defuses the bomb hidden in her mallet, thus saving the city. A heavily-wounded Deadshot is likewise able to defeat the Joker, though the villain escapes through a fall. The epilogue shows Deadshot, a free man and reunited with his daughter, about to snipe Amanda Waller in retribution for forcing him into the Suicide Squad. The scene ends before he pulls the trigger. 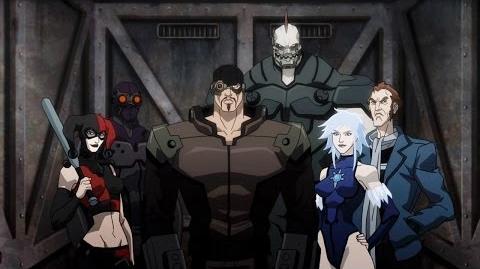 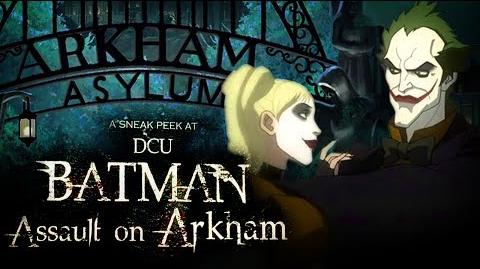 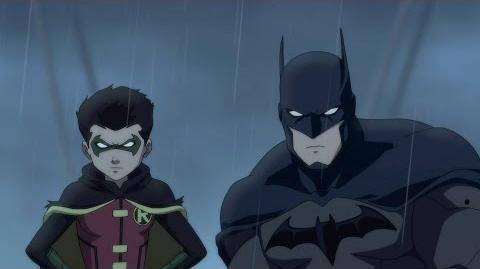 Batman Assault on Arkham - Waller Talks to the Suicide Squad 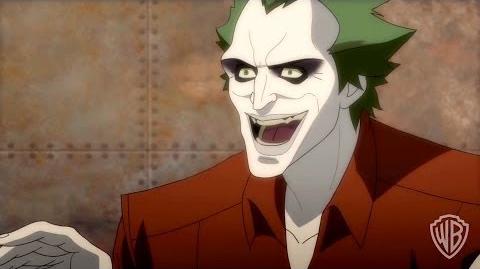 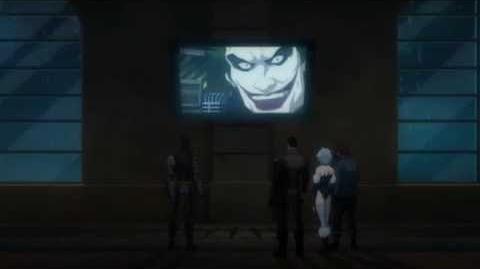 Joker and Harley back together

Bane goes on the rampage

"For someone's who's not Batman, you've been a real pain in my ass." 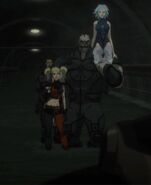 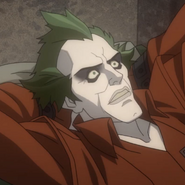 Joker realizes his way out

Joker gets "out-crazied" by Deadshot

"I know that sound. Someone's flossing their brain."