The Batwing is Batman's personal aircraft. He sometimes traveled in it as an alternative to the Batmobile, and it could also be controlled remotely to deliver items. An example of that was when Batman summoned the Batwing to deliver the Line Launcher in Batman: Arkham Asylum, the Batsuit and the upgraded Grapnel Gun in Batman: Arkham City, the cure to stop Copperhead's poison in Batman: Arkham Origins, and the XE Suit in Cold, Cold Heart. While the Batwing was redesigned in each of the games, all the versions shared the same capabilities, with those being the following:

Taking advantage of the resources of WayneTech's various divisions, notably Wayne Aerospace, Bruce Wayne was able to modify a prototype stealth aircraft for use in his crime-fighting career as Batman.

The Batwing had preprogrammed flight plans to fly to certain destinations. Alfred setup different points around Gotham City so that Batman could use them to get around with more ease.

The Batwing was available as a form of Fast Travel for Batman to use. Enigma's (later known as The Riddler) jamming towers needed to be disabled in order for Batman to summon and use the Batwing at specific points in Gotham.

Batman also used the Batwing to distract Firefly on the Gotham Pioneers Bridge so that he could approach the bridge, defuse the bombs, and rescue the hostages.

Batman used the Batwing to go after Mr. Freeze after he captured Ferris Boyle at Wayne Manor on New Year's Eve, and it was used to drop off the XE Suit on top of My Alibi. The Batwing had the same design from Arkham Origins.

Batman redesigned the Batwing to be able to fly in smaller areas.

The Batwing was seen in the Batcave, delivered the Line Launcher, and was used as a substitute Batmobile for Batman to get off of Arkham Island at the end of the game to stop Two-Face from robbing the Second National Bank in Gotham.

The Batwing was used again to deliver the Batsuit and the upgraded Grapnel Gun in Arkham City. The Batwing was also redesigned for the game, as it could also be seen in the Batcave Predator Challenge Map.

The Batwing helped upgrade the Batmobile with the Power Winch, the Drone Virus, or the Weapons Generator Mark III. As in previous games, the Batwing once again delivered the Batsuit and upgraded Batman's gadgets. The Batwing was used to bring Killer Croc, Deacon Blackfire, and Scarecrow to the GCPD Lockup. It was also used to bring the Batmobile back to land after In From the Cold.

After Batman had Alfred prepare The Knightfall Protocol, the Batwing carried the Batmobile and the recently-unmasked Bruce Wayne back to Wayne Manor. Upon entering, Wayne Manor was rocked by a massive explosion, apparently killing Bruce and Alfred. The Batwing and Batmobile, however, remained apparently untouched by the explosion. As such, the fate of the Batwing following Bruce's supossed death is unknown. 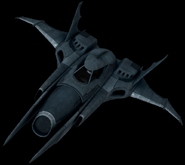 The Batwing in Arkham Asylum.

The Batwing in Arkham City. 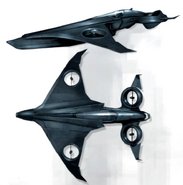 The Batwing in Arkham Origins.

The Batwing Cockpit in Arkham Origins.

The Batwing in Arkham Knight.

The Batwing during The Knightfall Protocol.