Detective Comics #463 (September 1976)
The Eric Needham version of Black Spider appears in the animated movie, Batman: Assault on Arkham. He worked as a member of the Suicide Squad on a mission to assassinate the Riddler.

Black Spider was mentioned in Batman: Arkham Origins in a file folder at the Steel Mill with a red "Rejected" stamp on it, which implied that the Joker (while disguised as Black Mask) considered hiring him as one of the assassins, but decided against it.

The Eric Needham version of Black Spider appeared in Batman: Assault on Arkham, and was voiced by Giancarlo Esposito. He appeared as a member of the Suicide Squad. When the team was sneaking into Arkham Asylum, Black Spider killed one of the chef's who were playing poker and stole his hat to complete his disguise. Black Spider got past security and once in the kitchen, he put a bunch of utensils in a microwave, which made it explode, and caused the distraction that the Suicide Squad needed. Later on, Batman and Black Spider fought, and Batman defeated him and switched costumes as a way of joining the Suicide Squad without their knowledge. Black Spider was last seen walking weakly until the Joker (mistaking him as Batman at first) ambushed and attempted to murder him, only for Amanda Waller to do so first by triggering the detonator in his neck which killed him instantly.

Black Spider in Assault on Arkham 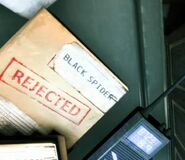