The Bo Staff is a retractable metallic staff used by Dick Grayson, Tim Drake and possibly Jason Todd in

their times as Robin, as it was used for offensive and defensive purposes, easily knocked out an average thug with a quick hit, and extended out into a ballistic shield.

When eight assassins were hired to kill Batman on Christmas Eve, one assassin, Deathstroke, wielded a metal retractable Bo Staff as his main weapon and used it against Batman in their showdown on the Final Offer. However, Batman eventually took hold of the Bo Staff and broke it in half over his knee, which forced Deathstroke to resort to using his sword.

If one chose to play as Deathstroke, the Bo Staff was the assassin's main weapon. The Bo Staff contained a silenced rifle (that fired non-lethal rubber bullets) inside of it and could eject a barrage of micro-explosives. The Bo Staff in-game was referred to as a "Ballistic Staff". The Bo Staff could also do a Special Combo Takedown where Deathstroke jumped in the air, soared down, slammed his staff onto the ground, made a shockwave of automated, stunning electricity erupt from it, and stunned any enemy within its radius.

Robin used the Bo Staff to help Batman when he was ambushed by a team of assassin's from the League of Assassins, caught the assassins off-guard, and floored them with a few quick swipes of his staff. Robin relented from attacking the lead assassin that had Batman pinned down when the latter told him to "stand down."

Robin used his Bo Staff to take out Harley Quinn's Henchmen at her secret base and a Titan Henchman to save Batman, who was taken by Harley to take revenge for the Joker's death two weeks after Arkham City.

Robin used his Bo Staff for combat during Harley's assault on Panessa Studios, and it was again the main weapon of the playable version of Robin. It was broken after Scarecrow kidnapped Robin, and the riddle: "You, a father figure? You overwork and break your staff" could be solved by scanning the pieces.

A wide shot of Deathstroke swiping his staff to knock out a band of enemies.

Another wide shot of Deathstroke using his staff in combat. 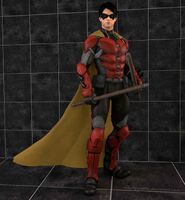 Dick Grayson using it as a staff ... 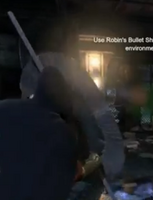 Robin using it as a Shield