Start a Wiki
Ben Turner came from a ghetto neighborhood in Central City. When he was young, Ben's parents were attacked by a burglar. Ben found and killed the burglar for the attack of his parents. Ben, in an effort to control his rage, turned to martial arts. Turner was assigned to take down the League of Assassins, and discovered that the League had killed his fiancé, and then proceeded to brainwash him. Turner got rid of the demons by channeling them into the Bronze Tiger. Tiger trained as an assassin, and developed a fearsome reputation in the world. Tiger traveled around the world and his identity remained secret. Some time later, he transferred to Gotham City and ended up face-to-face with the vigilante known as Batman.

Bronze Tiger was asked to join Penguin's gang. After Tiger refused, Penguin had forced him to fight in his arena. Eventually, Batman found the arena, along with Tiger. Penguin then forced the two to fight. After Tiger was defeated, Penguin sent his men into the fighting pit. Tiger woke up, and decided to attack Penguin's men. He managed to wound Penguin in the attack. Tiger told Batman to go after Penguin, who fled, while he decided to fight the thugs that remained in the arena.

In the aftermath of the breakout, Bronze Tiger, along with Deadshot, were recruited by Amanda Waller as part of her "Suicide Squad" Mission. 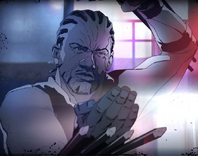 Retrieved from "https://arkhamcity.fandom.com/wiki/Bronze_Tiger?oldid=80941"
Community content is available under CC-BY-SA unless otherwise noted.