Start a Wiki
Brute was an enemy-type that was faced in Batman: Arkham Knight, and replaced Armored Henchmen and Enforcers. Most were aligned to the Arkham Knight's Militia, but some could be hugely generic thugs (only Harley and Penguin had brutes in the main story).

These enemies appeared bigger than normal enemies. One Brute defeated was worth 250 XP. Like Armored Henchmen, Brutes needed to be taken down with a Beatdown, as their blocks absorbed all direct attacks. One difference was that you couldn't counter an attack from a Brute, but you could intersect it. Another difference was that you couldn't use a normal takedown or a Fear Takedown to defeat it. Also, unlike the Armored Henchmen from the previous games, the Militia Brutes required two Special Combo Takedowns to go down, if the Beatdown or Dual Takedowns weren't used.

In combat, a Brute could also be even more lethal once armed with weapons like knives gouging out of their gauntlets, which forced the player to perform a complex knife-counter each attack, electric gloves, which made them invincible and harder-hitting until the electricity dissipated, and shields, which forced Batman to do a shield takedown. Non-militia Brutes couldn't switch weapons. Armed militia Brutes could switch between these three weapons, and announced doing so.

Brutes possessed a unique ability to throw unconscious soldiers at Batman as a form of ranged attack and even threw live soldiers if Batman was out of their reach, injuring and potentially knocking out the soldier in question. They could not perform this attack on other Brutes or minigunners or if they were equipped with weapons. 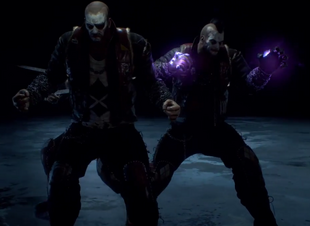 Concept of a Penguin Brute. 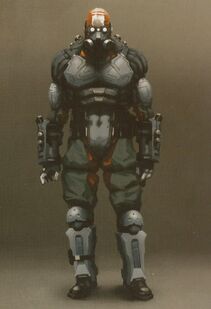 Concept of a Militia Brute. 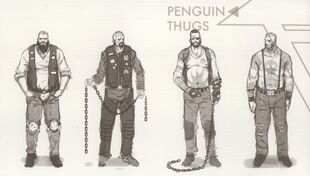 Concept variations of Penguin brutes.
Add a photo to this gallery

Retrieved from "https://arkhamcity.fandom.com/wiki/Brute?oldid=90395"
Community content is available under CC-BY-SA unless otherwise noted.