Candy was raised on the streets, but managed to pull herself up and earned a business degree. Unfortunately, lean times and a contracting job market caused her to fall in with the Penguin's crowd. The recession had driven many well educated people to take desperate action to support themselves, but that was no excuse for criminal behavior. Her crimes were minor, however, and made her an excellent candidate for rehabilitation.

According to a profile obtained by Batman, Candy was known to have been raised on the streets. Thanks to her determination, she managed to persevere and earn a business degree. Yet lean times and a contracting job market forced her to fall in with Penguin's crew. Unlike other members of the Penguin's crew, she was known for only committing minor crimes.

Candy is one of Penguin's allies during the Christmas Eve Incident. When Batman infiltrated the ship and pursued her partner, Tracey, the latter tried to call Candy for backup. Candy told her she was unable to due to aiding Penguin; instead she suggested using the other thugs and Electrocutioner to deter Batman, unaware that he had already defeated them. Candy was first seen when Batman infiltrated the ship, the Final Offer. She was present when Cobblepot was torturing Alberto Falcone and even gave Cobblepot a summary of the torture. When Batman entered Cobblepot's Office, Candy screamed and ran behind Penguin's desk.

When Deathstroke and Batman fought in the Boiler Deck Fighting Pit, Candy, Tracey, and Cobblepot could be seen watching the fight. After Batman defeated Deathstroke, the three turn to retreat. As they are walking away, Cobblepot seductively smacks Candy's bottom, which she doesn't seem to mind. They then hide in Cobblepot's Office for the rest of the game alongside Tracey, as Cobblepot revealed in a transmission to Batman taunting him when the latter attempted to pursue him (with it also being strongly implied that they were about to get intimate with him).

Although Candy did not physically appear, Penguin referenced her when he threatened his men while he was trapped in ice from the Freeze Gun and said that he would have her draw him a "nice, warm bath" so he could drown them all in it.

Candy was a very attractive black woman. She had a bracelet on each of her arms. Candy was shown to wear a black pinstriped dress with white belt. She wore her black hair in a ponytail. She had brown eyes. Candy wore black glasses, red lipstick, a gold necklace, and black heels. 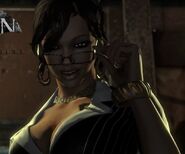 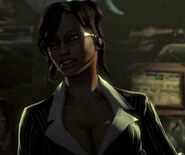 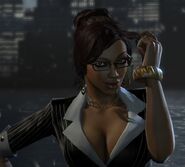