Head of the Falcone Family

Allow me to introduce myself: My name is Carmine Falcone, people call me "The Roman".

Gotham is my city.Carmine "The Roman" Falcone

The head of the oldest crime family in America, The Falcone Crime Family, Carmine "The Roman" Falcone was the Don of Gotham City. He ran the criminal empire that controlled most of Gotham.

Carmine was the son of Vincent Falcone, and the heir to the Falcone Empire. He was husband of Louisa Falcone, brother of Carla Viti, and father to Kitrina Falcone, Sofia Falcone, Alberto Falcone, and allegedly, Selina Kyle. His arch-nemesis was Sal Maroni, the head of the Maroni Family.

Carmine ran his operation as a traditional Mafia. He didn't engage with any costumed "freaks" and kept things in the family. He ran several legitimate businesses, such as shipping and garbage collections.

For over a century, The Falcone Crime Family held absolute power in the Gotham Underworld. As gang rivalries tensed, Luigi Maroni was known to have shot Carmine, mortally wounding him. This prompted his father Vincent to bring him to the surgeon Thomas Wayne, who proceeded to save his life. Sometime after the murder of Thomas and Martha Wayne, Carmine Falcone visited their son Bruce. He told him that he wished to repay the life debt by offering Bruce the privilege of one favor that Bruce could ask at any time. Bruce never called in the favor, knowing that Falcone would never grant the one he wished: To turn away from a life of crime entirely.

As the years passed by, Carmine had been forced to watch his family legacy begin to be usurped as the first "super-criminals" began appearing and masked vigilantes soon followed them. That gave Carmine an unwanted reputation as "Gotham's Last Don."

At some point, Carmine Falcone supposedly arranged to have a struggling comedian with severe anger issues abducted at a Comedy Club as well as threatened the man into conducting a heist at Ace Chemicals using the identity of the infamous criminal Red Hood, also torturing his pregnant wife to a state of near death with the implied threat that they will kill him too if he refused him.

At that point, the Falcone's entered a rivalry with both Black Mask and the Penguin, two up-and-coming crime lords who tried to move in on Carmine's operations.

In order to stave of the competition, Carmine decided to branch out the Falcone's operations, and entered the weapons dealing business. Carmine's son, Alberto, was abducted by the Penguin, and was tortured by him. Penguin demanded that Alberto convince his father to back out of the weapons business. Alberto complied until he is rescued by Batman on the Final Offer.

Carmine later lost the gang war with Penguin and was forced out of the gun trade. That was partly due to the fact that the Penguin employed Mr. Freeze to design cryogenic weapons for him (weapons that were originally commissioned by GothCorp).

Eventually, Carmine was arrested and prosecuted by Harvey Dent, the District Attorney of Gotham.

Imprisoned at Blackgate Prison during his trial, Carmine refused to go down quietly, and, with the help of corrupt prison and court guards, he attacked Dent with acid.

Carmine's trial presumably collapsed after that as he was still a free man years later. According to Dent (by that point the super-villain, Two-Face) years later, Falcone also did that act because he couldn't get to Batman.

As his trial collapsed following his attack on Dent, Carmine was released, and was not present at Blackgate during the mass breakout.

Carmine and his criminal associates remained aloof during the Arkham Asylum Riots. However, during the distraction provided by the Joker, another new gangster, by the name of Two-Face, robbed a bank without the Don's permission.

Ironical for a man who hated freaks, Carmine had unwittingly created a new one and a rival at that.

Following the Arkham Asylum Riots, Carmine became embroiled in another turf war, that time with the Maroni Family. That was the most violent gang war that Carmine had fought. Sadly for the former capo de tutti capi of Gotham, crime worse than that was yet to come.

After the riots at Arkham Asylum, Hugo Strange schemed to open Arkham City. Carmine tried first to bribe, and, after he failed that, intimidate Mayor Quincy Sharp. It was all to no avail. The Mayor then moved to close down the Falcone's businesses, both legal and illegal. Criminals, regardless of their affiliation, wealth, or political connections were being rounded up and sent into Arkham City.

Increasingly desperate, Carmine called a family meeting. After some dispute, Carmine declared that in order to avoid imprisonment, the family must leave Gotham.

But first, Carmine dealt with the Maroni's once and for all (killed dozens of them in an ambush at their Italian restaurant before they left the survivors of the massacre to be arrested) and then, with his family, fled to Bludhaven.

However, Carmine still retained some power in Gotham behind the scenes. It's implied that he worked with Scarecrow, provided him a boat to use as a base, and wrote a note that said that "Mister Fine will arrange a more permanent base." 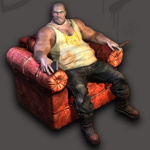