Like Batman, Catwoman had her own signature Suit which she used in her “job,” though hers was thievery. It was a black, latex, full body suit, a hood with cat ears mounted on top, and a pair of Red Goggles which contained heat sensing lenses, that were used in Catwoman's Thief Vision.

It was a zip up suit, and was completed by a pair of boots and gloves, with the Clawed Gloves having retractable claws on each finger. Unlike Batman's, Catwoman's suit didn't necessarily, have a fair amount of either defensive or offensive qualities. It was neither knife-proof nor bulletproof, which made the suit purely cosmetic, though that was possibly in an effort to make her moves faster.

Catwoman was seen in the suit throughout the whole game. Like Batman's suit, it became ripped and shot over time, and showed battle damage.

The Catsuit returned, mostly unchanged from Arkham City. Catwoman's Thief Vision wasn't working, as it may have been broken when she was captured by The Riddler. While the suit wasn't damaged, Catwoman's face, however, was significantly damaged; it had numerous cuts and bleeding. 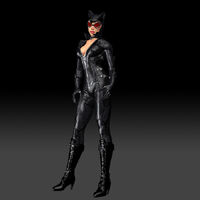 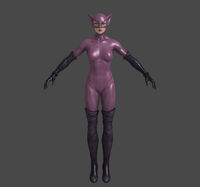 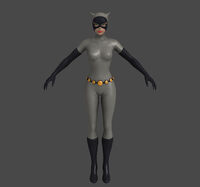