The Church/Medical Center was a church in the center of Old Gotham and eventually, Arkham City. It was where Aaron Cash's team was stationed at.

Designed by Cyrus Pinkney, with the financial backing of Judge Solomon Wayne, who was Bruce Wayne's great grandfather, the church was constructed. Solomon Wayne was often allowed to give guest sermons, due to his harsh sense of justice and wanting to drive out the malevolence from Gotham City.

Black Mask seemed to be keeping a horrendous amount of drugs in the Church. Batman destroyed the last drug stash before he confronted Sionis and some of his men, defeated them, and left Sionis to be arrested by the GCPD.

After he saved Catwoman from being sniped at by the Joker, Batman used his Detective Mode to trace the trajectory to where the sniper shot originated at. Aaron Cash with his team of medics and security guards were stationed at the Church until Harley Quinn and four of Joker's Henchmen came in and held them all hostage, only to be saved by Batman. It seemed that Hush was one of the medics.

Medic Adam Hamasaki said that Hush went insane, cut his own face off, was unconscious on a medical bed, and was gripping a mysterious medical tool box. Later, if you came back, his body was missing. Batman later climbed to the Bell Tower, in search of the mysterious gunshot, only to find out that Joker shot a remote controlled sniper rifle and that the Bell Tower was rigged with explosives. Batman dashed out the window as the entire top part of the Bell Tower was blown into flames.

If Batman came back, he discovered that Cash and his team were kidnapped by the Riddler, so he went around Arkham City, solved his riddles, and saved each hostage.

The Church in Arkham Origins.

Batman using the Line Launcher in front of the Church.

Batman using a Smoke Pellet on four of Joker's Henchmen at the Church to escape to a Vantage Point.

Hush at the Church in Arkham City.

Azrael's image on the Church's window.

Batman, looking at the back of the Church. 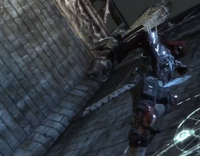 Azrael, sliding down the backside of the Church.

Retrieved from "https://arkhamcity.fandom.com/wiki/Church_and_Medical_Center?oldid=82735"
Community content is available under CC-BY-SA unless otherwise noted.