Originally an actor in Horror B-Movie films, Basil Karlo went mad when he found out that a classic film of his was to be remade without his involvement. He then took on the mask of the film's villain, "Clayface", and killed several of the remake's cast and crew before eventually being stopped by Batman and Robin.

Later, Karlo stole some experimental compounds, injected himself with the compound, and became a superhuman imbued with the abilities to change shape, melt into protoplasm with a touch, and mimicked the powers of heroes or villains that he copied.

During the night of Christmas Eve, Basil Karlo played in an impressionist show at the Monarch Theatre. It seemed that he hadn't been turned into Clayface at that point.

When Karlo learned that the studio he worked for was remaking of his classic film, The Terror without his involvement, he was driven insane. Karlo then put on the costume of the film's killer Clayface and started to murder the actors and actresses in the film. Karlo's plot was eventually thwarted by Batman and Robin (Dick Grayson) when he was about to kill Bruce Wayne's fiancée (Julie Madison). Not long after, Basil managed to escape prison when his prison ambulance fell off a cliff and he tried to murder Julie once again, but was stopped by Batman once again. A couple of years later, Basil was broken out of prison by Clayface IV (Sondra Fuller). He joined her and Clayface III (Preston Payne), and they gathered the dead remains of Clayface II (Matt Hagen), and called themselves the Mud Pack. Basil tried in vain to revive Matt Hagen, but the Mud Pack had only managed to briefly revive him. Later, after the Mud Pack was defeated, Basil tricked his allies by stealing samples of their blood and manged to escape. Basil took the samples to a science lab and mixed the blood samples together and injected himself with it and became the ultimate Clayface. He then gained all of the other Clayface's powers such as Clayface III's melting power and Clayface IV's ability to gain the powers of anyone he/she was mimicking. The blood of Clayface's II, III, and IV also give him super strength, stamina, speed, and also made him capable of growing into an incredible size so he became a major threat to everyone who got in his way.

When Clayface was committed to Arkham Asylum over the years, he was put in the Penitentiary. The doctor treating him was most likely Dr. Young, as she made personal notes about him.

Batman, while searching for Arkham's Warden, Quincy Sharp, came across a cell behind a clear wall with no bars. A sign next to it read "Danger. Do not approach. Inmate may be impersonating other personnel." The cell contained a female mannequin, white hand-prints, and excessive Clayface goo. What appeared to be security guard Aaron Cash was pacing behind the wall, and urged Batman to let him out.

However, after rescuing the warden in the room above, another man looking like the warden appeared in the cell, claimed that the one rescued was an imposter, and begged to be let out. When Batman turned around, a morphing noise sounded and in the cell appeared what seemed to be Commissioner Gordon. He simply laughed at Batman. Detective Mode revealed that the shapeshifter had no skeleton, and scanning him revealed him as Basil Karlo/Clayface. His profile could then be read and the Riddler's riddle, "A case of mistaken identities?" was solved. Clayface commended the detective for discovering his identity, and asked him to keep it a secret, as he had a reputation to keep.

After all but one of the hidden chronicles are found around Arkham, Quincy Sharp had disappeared from his sanctuary. Clayface mentioned how the warden had left in a hurry despite Batman's insistence that he stay hidden, all the while impersonating Commissioner Gordon.

When the rescue teams of the GCPD swept through the ruined Asylum after Joker's plans, one uninformed guard believed that Sharp was trapped within the same cell that Batman saw and let him out, while in reality, it was simply Clayface taking advantage of the situation to finally escape. It was only after the real Warden Sharp was found, did the guard realize his lethal mistake, but Clayface was long gone by that point and at-large.

Basil Karlo entered Arkham City completely undetected. Assuming the guise of numerous inmates and security personnel alike, the monstrous mudman eventually made contact with the Joker, who was revealed to be his cryptic employer. At first, Karlo was reluctant to form an alliance with the dying clown, but was quickly convinced to aid the Joker and embroiled himself in the Clown Prince of Crime’s last megalomaniac master plan.

Despite not actually being imprisoned in Arkham City, Karlo sided with the Joker. At the request of the Joker, Karlo mimicked his appearance prior to being affected by the TITAN sickness, to fool Batman, Talia al Ghul, and Hugo Strange. Karlo also agreed to move a large amount of explosives into Arkham Asylum.

With Karlo’s vast and nearly unstoppable abilities, Joker knew he had all but conquered Arkham City. Next to doubling as him, Joker used Karlo to carry out his most extreme tasks; including having the shape-shifter shut down Black Mask’s base of operations, and opening up the Sionis Steel Mill to the Joker and his gang. Karlo also impersonated Deadshot when infiltrating Penguin's operations, which resulted in Joker receiving arms directly from Penguin's armory. Joker could hide while Karlo did his bidding.

The plan was not realized by Batman until Talia was taken prisoner by the Joker at the Monarch Theatre. However, Talia managed to free herself and disarm the Joker, and proceeded to stab him. Not long afterwards did Batman deduce that Joker had been impersonated the entire time.

The actual Joker, dying from the sickness, revealed himself and shot Talia dead. Karlo arose and took on his natural form. After Batman questioned Karlo's motives for joining Joker, Karlo justified his actions, and stated that once he killed Batman, he would get the role of a lifetime (by impersonating Batman).

Batman was forced to fight Karlo by using Freeze Blasts to retrieve the cure and grab Talia's sword to slice him. As Batman froze Karlo, he sliced him into pieces. Batman and Karlo end up in the Lazarus Pit Chamber beneath the Theatre because the Joker placed explosives around the floor. Batman fought against many Clayface soldiers with his sword. Eventually, Karlo succumbed to the Freeze Blasts which Batman threw at him and then jumped into Karlo's body to retrieve the cure and sliced free from Clayface, incapacitating him. Batman then threw Talia's ceremonial sword in the Pit's controls to prevent Joker from entering the Pit. As a result, one of the generators fell down and knocked Karlo into the Lazarus Pit, and created a large explosion that destroyed most of the chamber and permanently incapacitated Karlo.

Attentive players may find clues that proves Clayface was doubling Joker the whole time: he always referred to Batman as "Batman", not as "the Bat" or "Bats" like Joker, and he lacked a skeleton when viewed in Detective Mode.

Karlo's dry mud was collected by GCPD when Arkham City shut down. Later, the explosives set by Clayface in Arkham Asylum were detonated, almost claiming the life of Batman who made a narrow escape.

Samples of Karlo's mud were acquired by various parties including Simon Stagg, who created Project: Meta, and Hush which he used for his face to hide his cosmetic surgery scars. Karlo also appeared during one of Joker's fantasies, and briefly during one of Batman's simulations for Robin. Karlo is still alive within the mud collected by GCPD but unable to take form again because of the Lazarus Particles mixed with his mud and the explosion from the generator.

Karlo's impression to get all the time to work it to another but soon has his career as a film actor which he is more to his condition for results of another. Karlo started to his movie "The Terror" with anything that has to along with the casts to be mindful for his actions like that way to be able for the film as Karlo's resistance.

While his bizarre ability to shape-change opens him up to the obvious, if controversial, diagnosis of multiple personality disorder, Karlo seems instead to be suffering from borderline personality disorder, with a special emphasis on identity disturbance. He is difficult to pin down on any subject, and defends his wild changes in affect as evidence of his dramatic abilities, which he considers to be wildly underrated. Rarely does he take his own shape, but frequently mimics me when I attempt to interview him.

His identity is at risk of splintering, due to the growing frequency of his adopting the identities of others to the exclusion of taking on his own.

I find his imitation of me to be especially unflattering; I am most certainly not the bitter, calculating academic he attempts to portray me as.

Horror film icon Basil Karlo went mad when he uncovered plans for his most classic film to be remade with a different actor in the lead role. He took on the mask of the Film's villain, Clayface, and killed several of the remake's cast and crew before being stopped by Batman and Robin.

Later Karlo stole and injected himself with experimental compounds that transformed him into a mass of living clay who can alter his composition to mimic anything... or anyone. 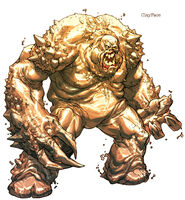 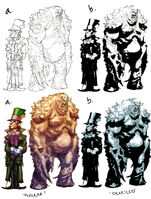 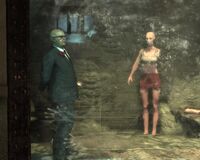