Copperhead was an expert escape artist and an assassin who was apparently a gang member from a Central American drug cartel who worked as a contract killer. She appeared to have advanced combat techniques and possessed many reptilian features, such as her forked tongue, slit pupils, and venomous talons. She served as a minor antagonist and one of Black Mask's 8 assassins in Batman: Arkham Origins.

Before she appeared in Gotham, Copperhead was already famous throughout most of South America for her skills as an escape artist, after having successfully broken out of fourteen different prisons. She also had tattoos that suggested a connection to a Central American gang. By the time she took the hit on Batman, Copperhead had two outstanding warrants in murder of the first degree and one outstanding warrant in theft.

Copperhead arrived in Gotham City and ended up captured and placed in interrogation. Copperhead managed to escape her overconfident interrogator, by breaking his neck with her legs while he tried to call for help before she received an envelope that detailed a bounty on the vigilante known as Batman. At some point during her contracted status, Copperhead had managed to deduce that her "employer" had actually been impersonated by The Joker.

After tracking Batman to the Steel Mill, Copperhead stalked her prey as he made his way through the establishment, killing one of Joker's Henchmen along the way. This, perhaps was a way to let Batman know what was in store for him, to try unnerving him.

Upon finding and interrogating a captured Roman Sionis, Batman was attacked and poisoned by Copperhead. The vigilante soon found a sample of her venom, scanned it, and had Alfred synthesize an antidote. While heading to ground level to receive the antidote from the Batwing, Batman had hallucinations of Alfred, the Bank Manager of Gotham Merchant's Bank, and Commissioner Loeb.

Arriving at ground level, Batman got into a lengthy fight with Copperhead and, after receiving and using the antidote, easily defeated the assassin. Attempting to coerce the vigilante into letting her go, Copperhead offered to provide information on the Joker's next meeting. However, Batman, using the electric signal emitting from the Electrocutioner's Shock Gloves, found no use in the criminal and left her in a shipping crate for the GCPD.

Shortly afterwards, there was talk about Copperhead's imprisonment. It turns out that the police had gotten wise to her tricks, and locked her in a cell with a glass wall, as she would just easily escape through metal bars due to her contortionist abilities.

Copperhead was a ruthless killer and capable tactician. While Copperhead was capable of rapidly choking or crushing the neck of her target, she chose to poison Batman and attack while he was delirious, instead of engaging in direct combat. Copperhead was confident - perhaps too confident - in her own abilities as even when Batman was cured, she still believed that she could take him even without the poison. Despite this, Copperhead had a surprisingly keen intellect, as she was able to seemingly deduce the truth behind the Joker's trickery, as well as successfully break out of fourteen different prisons presumably on her own. She also appeared to know when to give up and was willing to give Batman valuable information in exchange for him letting her go. Although its very likely that this was probably a ruse.

Copperhead was also shown to have a very sadistic side as she stated several times that she would like to tear Batman's corpse apart, and seemed to enjoy watching him trying to move around with her poison flowing through his veins. And even laughed cruelly whenever it seemed like he was about to stumble. This could be considered a weakness, as she often took too much time watching her victims pain and despair instead of dealing a finishing blow. Copperhead appeared to be very foul-mouthed when angered as she was heard cursing Batman numerous times in Spanish.

Despite learning that the Joker was posing as Black Mask, Copperhead still tried to complete her contract, despite being lied to by her employer, which indicated a sense of professionalism and practiced apathy, as long as her employer followed through with his end of the contract.

Copperhead is a contortionist, and can bend and flex her body beyond the normal human range of motion. She has short whitish-blonde hair, and yellowish reptilian eyes. She wears black eyeliner, which slightly obscures her features and throws her unusual eyes into sharp contrast. She has many tattoos across her upper body and arms, and wears close-fitting snake-skin clothing, as befitting her moniker.

Initial reports of a contract killer using the name "Copperhead" have appeared in various South American Criminal Databases. Reports are, however, inconsistent. Conflicting intelligence suggests "Copperhead" may be a pair or even a group of individuals operating under the pseudonym, both male and female. Analysts suggest Guatemala is the center of operations of this identity.

Some elements are consistent across all reports, and will be represented here. All reports indicate the killer is highly mobile, with an extremely flexible physiology – this grants the individual access to structures via small accessways, vents, and construction imperfections. Attributed killings tend to group under the heading of asphyxiation, fracture of the cervical vertebrae or death through the application of exotic poisons.

Informational on custodial process: on at least three occasions, suspects linked to the copperhead, identity have been reported to enter custody only to escape via unexplained means. Suggest the use of multiple leg and arm restraints and 2–man security teams on 24hrs watch.

Records indicate "Copperhead" is an alias used by hitmen working for Central and South American drug cartels, but this Copperhead is clearly female. This could indicate that the name Copperhead is actually a title or label for an underworld organization. Either way, Copperhead seems capable of escaping nearly all forms of confinement. Kill techniques range from strangulation and crushed bones to acute toxicity resulting in death. 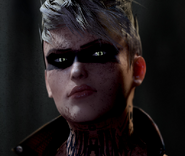 Copperhead in the introduction scene in Arkham Origins

Copperhead, along with the other seven assassins

Copperhead about to attack Batman 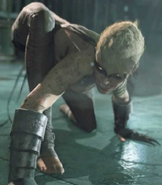 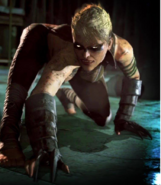 Copperhead about to poison Batman

Copperhead after she poisoned Batman with her claws

Copperhead before she was defeated by Batman