The Cyrus Pinkney Institute for Natural History was once a famous museum in Gotham City, but after Arkham City was constructed, it became the base of the Penguin and His Henchmen.

It is located at the very southwest of Arkham City in the Bowery and was one of the biggest spots in the Prison. It held many crude exhibits, mostly dead members of enemy factions like a Joker Henchman, a TYGER Guard, a Two-Face Henchman, and even a League of Assassins Ninja.

The Museum was seen on Christmas Eve, but since it was still operational at that point, it wasn't accessible because it was closed for the night. The Museum was also where Deathstroke was confronted by Black Mask's Henchmen as a test of his skill.

When a chunk of Gotham was isolated and all the inmates from Arkham Asylum were thrown into it, a three-way turf war broke out between Two-Face, the Joker, and the Penguin, all having a main base for themselves and their minions to settle. When the Joker got deathly ill, he knocked out Batman, poisoned him and most of Gotham, and told him that only Mr. Freeze could make the cure.

Batman found the coldest place in Arkham City, the old GCPD Building, only to find that the Penguin had Mr. Freeze held prisoner at the Museum. Batman hacked his way in and fought his way through the Trophy Room, the Gladiator Pit, the Torture Chamber, the Museum War Room, and the Armory. Batman then went to the Iceberg Lounge, disabled Mr. Freeze's Freeze Gun, and Penguin had him fight Solomon Grundy who lived under the Iceberg Lounge. In the end, Batman killed Grundy, defeated Penguin, and locked him up in the exhibit case that was meant for Bruce Wayne in the Trophy Room. Later, Two-Face overthrew the Museum and took Catwoman's loot, but only took half of it for himself, and gave the other half of it away to his henchmen and was knocked out by Catwoman herself.

During Protocol 10, the building sustained heavy damage from TYGER, as Professor Hugo Strange wanted the museum to be destroyed. However, the interior of the building remained intact.

All the Rooms of This Map

The Museum shown on the map of Arkham City.

A TYGER Helicopter monitoring the Museum from above.

A Batarang on Joker's face on a map of Arkham City in the War Room.

Penguin locked in the Bruce Wayne Exhibit Case in the Trophy Room at the Museum. 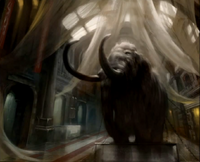