The Escrima Sticks are pair of specialized batons wired with tasers, which make them electrified, and are used for most of Nightwing's combat.

Nightwing used his Escrima Sticks to protect Wayne Manor when Batman was in Arkham City. He used those against Hugo Strange's TYGER Guards.

Nightwing used his Escrima Sticks as his main weapons. Nightwing used them when he fought along side Batman, while they were trying to find and destroy Penguin's weapon caches. In the Harley Quinn Story Pack DLC, he used them in a boss battle against Harley Quinn.

The Escrima Sticks were used for the most of Nightwing's combat. They also could be used for most Takedowns and Special Combat moves.

Nightwing could use those to throw and ricochet off walls and into enemies, which made them groggy and stunned them so that they were open for heavy attacks and/or Takedowns.

In the Harley Quinn Story Pack DLC boss battle, Nightwing's only attack with the Escrima Sticks was a simple lunge and swipe, that was similar to a stun baton attack. 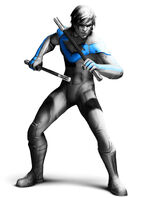 Add a photo to this gallery

Retrieved from "https://arkhamcity.fandom.com/wiki/Escrima_Sticks?oldid=85755"
Community content is available under CC-BY-SA unless otherwise noted.