The Explosive Gel is a gadget and occasional weapon. Batman could spray the gel on weak structures and detonate it at will. In combat, Batman could use the Quickfire Explosive Gel, in which he quickly sprayed the gel on the ground. When triggered, any enemy in the blast radius was knocked to the ground. The air powered weapon fires cartridges of highly destructive gelignite (a gelatinous form of explosive, used in the real world mostly for mining). Batman uses small amounts of the gel to minimize collateral damage and not kill bystanders (including himself).

Batman had Explosive Gel even by the time of his second year of crime-fighting. In Multiplayer, any enemy caught in the blast radius of the Explosive Gel was instantly knocked out.

Batman utilized an "Explosive Gel Launcher" to fire gel onto surfaces that were not in direct reach.

Batman brought a supply of the Explosive Gel in the trunk of the Batmobile to Arkham Asylum, which he retrieved after The Joker began his takeover. It was the first weapon other than the Batarang that Batman used. Batman later used it to set a trap for Killer Croc and then in his fight against the Titan-enhanced Joker.

Again, Batman utilized the Explosive Gel to explode everything that was in his way, from walls to thugs.

The Explosive Gel returns in Batman: Arkham Knight, and it works similarly as the previous versions. In addition, quick firing will shoot a small glob of gel, which can temporarily make enemies disoriented and destroy weak wooden walls from a distance. However, the small glob has no effect on breakable brick walls. Every WayneTech Upgrades are only applied on the sprayed gel. Furthermore, sprayed gel is able to knock enemies unconscious should they approach the detonation radius during Predator Mode. Batman also uses this gadget to destroy the gun caches smuggled in by Penguin during the Gunrunner mission.

That gadget was used to break structures and could take down armed and unarmed thugs when it was used in collaboration with a structurally unsound wall. If a single spray of Explosive Gel was set off on a normal, structurally sound wall, the thug would only be knocked down and be made vulnerable to Ground Takedowns. Explosive Gel could be used to stun or take down thugs, confuse Titan-bosses, and destroy weak walls.

Retrieved from the trunk of the Batmobile, upgrades to the Explosive Gel could be bought with XP through the WayneTech Upgrades Menu.

The Explosive Gel worked in the same way as in Batman: Arkham Asylum, and all the upgrades that were available then were already in place at the start of the game. The Quickfire feature was introduced, which allowed Batman to apply it quickly on the ground. It was used more prominently to destroy the twelve Titan Containers around Arkham City.

The Explosive Gel worked the same way as it did in Batman: Arkham City.

In City and Origins, using the "Freeflow Gadgets" upgrade, the Explosive Gel had a much larger blast radius, which could, in turn, knock more enemies down. In Arkham Knight, using the Freeflow version of Explosive Gel made Batman shoot a ball of the gel to an enemy, but instead of the normal timer, it exploded instantly, and made all enemies in close proximity dizzy. 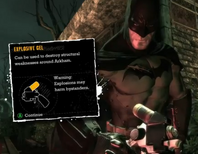 The Explosive Gel in Arkham Asylum.