Batman #404 [Feb 1987] (First Appearance)
The Falcone Crime Family was one of the crime families in Gotham City, and was run by their family head, Carmine Falcone. They ran mundane rackets for smuggling drugs and protection rackets.

The Falcone's tended to avoid high profile super-criminality (viewing such people as freaks), preferred to keep to themselves, and ran more mundane rackets such as blackmail, bribery, drug smuggling, and protection rackets.

The Falcone's also had a large presence in Gotham City's shipping industry which was used as a front for their illegal activities: Gotham was covered in signs that advertised, "Falcone Warehousing and Storage", and "Falcone Shipping".

Despite their public disdain for the "Insane Freaks", the Falcone's, hypocritically, maintained under the table dealings with such "Freaks" like the notorious Calendar Man and Catwoman (although the business with Catwoman reportedly ended in a mess). Worse, Alberto Falcone, the son of the godfather, was reputedly suffering from mental illness himself.

Alberto Falco was known as the first to arrive in America, bringing along his family with him from Italy. There he promptly changed his name to Al Falcone, and became known for being a cold-blooded butcher of men. At some point his son Vincent Falcone took over, having a better grasp of America's criminal landscape. In time, Vincent's son Carmine Falcone would take over and serve to improve his father's grip on crime.

For over a century, the Falcone's held absolute power in the Gotham Underworld, but they eventually began to loose ground as the first "super-criminals" began appearing and masked vigilantes soon followed them.

Batman started to interfere with Falcone's and Black Mask's illegal operations all around Gotham.

During the hunt for Batman, that was orchestrated by an independent mobster called Black Mask, the Falcone's found themselves suddenly being pushed out of the weapons smuggling racket by a new player in Gotham's Underworld, with Alberto ended up in the clutches of that man: Oswald Chesterfield Cobblepot, who was known as the Penguin.

As the Penguin continued to smuggle weapons in the following years, and only grew in wealth and influence in the city's underworld, it's assumed that the Falcone's lost the gang war with Penguin (who had Mr. Freeze designing weapons for him during the crisis) and were indeed forced out of the gun trade.

Eventually, the Mafia lost so much influence and prestige. that the Family Don was arrested and prosecuted by Harvey Dent, the District Attorney of Gotham City. an act that would have been unthinkable in previous years.

However, Carmine refused to go down quietly, and attacked Dent with acid. Carmine's trial presumably collapsed after that as he was still a free man years later.

During the Arkham Asylum Riots, the Falcone's remained neutral, and preferred to let the freaks kill themselves while they sat back and watched.

Following the Arkham Asylum Riots, the Falcone's became embroiled in another turf war with the Maroni Family. Fighting for their very lives, the Falcone's murdered countless people and burned buildings to the ground.

Worse, following the election of Mayor Quincy Sharp, the Falcone's finally faced something that they had never encountered before, a politician who would not take their bribes, nor was he afraid of their threats.

As the Mayor moved to close down their business, both legal and illegal, the Falcone Family, afraid of the construction of Arkham City and the possibility of being incarcerated there, fled to Bludhaven.

Before they left though, the Falcone Family settled accounts with the Maroni Family: the Falcone's killed dozens of the Maroni's in an ambush at their Italian restaurant before they left the survivors of the massacre to be arrested and imprisoned in Arkham City while they made a clean getaway to the relative safety of Bludhaven.

The absence of The Falcone Crime Family created a power vacuum in Gotham City which other independent crime lords began vying to fill leading to violent clashes and gang wars. That would later play into the hands of Hugo Strange who delighted in ratcheting up the violence as part of his plan.

However, the mob still kept some cards close to their chest. It's implied that the Falcone Family had Scarecrow (himself presumed dead) working for them as an inside man in Arkham city, and provided him a boat to use as a temporary base.

Meanwhile, the Joker Gang was known to have seized the Falcone Shipping Yard and used it as a holding area to store Nora Fries' frozen body. Batman later attacked the Yard and arranged for Fries' safe transport back to her husband. 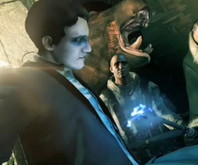 It's possible that Carmine Falcone could be Selina Kyle's biological father.