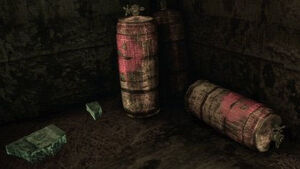 Fear Toxin, also known as Fear Gas is a chemical compound created and used by Scarecrow.

It was a drug that could be either inhaled or injected. When ingested it induced intense and sometimes irrational fear, which caused the user to go insane or even die in larger doses. Death is possibly by a concentrated dosage and the cause of death is most likely to be of sudden heart attacks, self-harm through use of the environment or unknown effects the chemical has on the brain and other internal organs. Heart attacks are probably the most common cause of death as a dose would cause heart rates to increase exponentially and lead to cardiac arrest. When Batman was exposed to the Fear Toxin in-game it led to a Scarecrow Nightmare.

In case of the event of his capture Scarecrow kept a cache of Fear Gas hidden behind a wall in Arkham Asylum. When Scarecrow escaped from his cell he tapped it to fight Batman. First he released it into an elevator at the Medical Facility, second through a wall vent in the Arkham Mansion's library and the final time through a cracked pipe in the Intensive Treatment Center's Cell Block Transfer. Scarecrow planned on releasing more of it into the Gotham River in Killer Croc's Lair but was pulled underwater, mauled and disfigured by Killer Croc.

Scarecrow's gas was seen throughout Arkham City. Canisters of it appeared in the third Riddler Hostage Room and also at Hush's Hideout. Roach, a victim of the toxin could be found in Scarecrow's Boat surrounded by crates of cockroaches used for Scarecrow's experiments and had a spasm when Batman approached him.

According to a City Story unlocked by scanning a Riddle, Scarecrow ground up the cockroaches he kept in his boat and forced Roach to consume them as part of his tests; the results were apparently promising enough that Scarecrow used the insects as one of the ingredients in his new toxin.

Scarecrow supposedly planted bombs of Fear Toxin all over Gotham City and forced a citywide evacuation after Jason Todd released some of it at Pauli's Diner. After seizing control of Ace Chemicals, he had his toxin produced on a larger scale and the factory rigged to blow. Most, if not all remaining occupants of Gotham wore gas masks and similar equipment to protect themselves if Scarecrow detonated his bombs. The Arkham Knight's Militia went over the plan to evacuate or find cover when the bombs went off and were reminded that it was absorbed through the skin, meaning the only way to avoid the gas was to be underground or above it. Simon Stagg was later revealed to have helped Scarecrow make the new strain of Fear Toxin while also using the Cloudburst invented by Alex Sartorius and saw it as profitable. Exposure to the Fear Toxin also caused Batman to have hallucinations about the the Joker, who taunted him about succumbing to his previous blood infection and becoming him. According to the Stagg Enterprises research logs the gas was potent enough that not even facial and bodily protection could block out the effects and, according to a militia soldier only slowed it down for a few seconds before kicking in.

Scarecrow's new strain was apparently strong enough to affect those who were usually resistant or immune; Poison Ivy immunized herself using spores she produced but removing the Cloudburst-amplified toxin resulted in her death, and despite Batman's willpower he was weakened to the point of almost letting Joker take control of him.

After being exposed to the gaseous toxin while walking through the halls of Arkham Asylum, Batman experienced elaborate hallucinations ranging from finding his parents' bodies in the Morgue, reliving his last moments with them and an 'inversion' where he was the lunatic brought to Arkham by the Joker which culminated in him being forced to travel through a twisted, nightmare-esque version of Arkham composed of islands floating over a brown whirlwind while fighting skeletons and evading a giant Scarecrow who normally crushed him if caught in his gaze.

The confrontations ended when Batman shone the Bat-Signal on Scarecrow at the end of each 'maze'; the signal apparently represented Batman's strength of will as he focused to get out of the hallucinations. Scarecrow himself noted after the third and final confrontation that he continued to resist even after taking in enough toxin to apparently drive ten men insane.

In the DLC content of Arkham Asylum and Batman: Return To Arkham, Batman could enter a Scarecrow Nightmare where he needed to avoid being hit for as long as possible.

After being exposed to Scarecrow's toxin again, Batman experienced horrifying flashbacks of Joker's heinous crimes (the crippling of Oracle and torture of Jason) as well as an auditory and visual recreation of Joker who taunted the Dark Knight. Along with this, Batman experienced vivid hallucinations where Oracle committed suicide (apparently being realistic enough to even fool Detective Mode), he snapped Joker's neck while fighting him in Crime Alley and essentially became Joker himself. Unlike the hallucinations in Arkham Asylum there was no definite way to break free as most were cinematic in nature and did not offer much in the way of gameplay. Unfortunately, exposure to the toxin caused Joker to see his fear of being forgotten letting Batman retake his being, and Scarecrow was not immune to his latest batch of toxin causing him to go mad.

However, if one had access to the Scarecrow Nightmare Missions DLC for the PS4 version of Arkham Knight, Batman with the Batmobile could be thrown into battle with a giant version of Scarecrow and armies of the Arkham Knight's Drones.

Scarecrow holding a bag of toxin gas in the elevator at the Intensive Treatment Center. 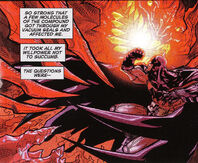 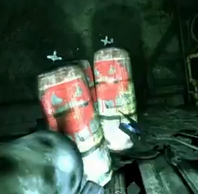 The effects of the Fear Toxin on the recipient's perception of their surroundings.

A toxin hallucination in the Arkham Morgue.

Batman under the influence of the toxin causing his eyes to glow.