The Freeze Gun was a weapon that was used by Mister Freeze that was able to create gusts of cold that approached absolute zero, and froze everything that was in its path. (liquids to solids) It could also creates sculptures of ice.

Some of Penguin's Henchmen used Freeze Guns to try to freeze Batman in ice. Others used them in various crimes, including a heist that ended with their use of a cryogun somehow setting the building that they were in, on fire. Mr. Freeze used the Freeze Gun to try to stop Batman from rescuing Ferris Boyle at GothCorp.

After he returned from the Demon Trials with Ra's al Ghul's blood, Batman was confronted by Freeze, who uses his Freeze Gun to try to kill him. Freeze was defeated, the Freeze Gun didn't appear again.

The Freeze Gun was placed in the GCPD Lockup Evidence Room. Officers such as Aaron Cash used the Freeze Gun to make ice cream before they were caught by Commissioner Gordon.

The Freeze Gun remained in the Evidence Room at the GCPD Lockup. Freeze never stole it back from the GCPD, as he's upgraded his Armor to have a wrist gun.

Penguin armed with the Freeze Gun 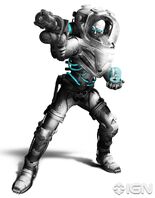 Mr. Freeze with his Freeze Gun in an Arkham City Promotional Poster

Mr. Freeze using the Freeze Gun in his fight with Batman in Arkham City