Gotham City is a fictional city set within the United States best known as the home of Batman. It appears in numerous comic books that are published by DC Comics.

Ridden with crime and with corruption, Gotham is home to a number of notorious super criminals such as the Joker, Harley Quinn, Two-Face, Penguin, Riddler, Poison Ivy, Black Mask, Bane, Killer Croc, and Scarecrow. Gotham City's name comes from the Gothic architecture it held, which built up an almost terrifying atmosphere that best identified it.

In the mid-1600s, settlers from Scandinavia came to America and labored through harsh winters to build the foundations of Gotham City. There were many tales that recounted what the settlers endured, including encounters with mythical beings and fights over Native American burial grounds. Much of Gotham's early history had been garnered through folklore, which was passed down orally during those first trying years. The British eventually took over the settlement.[1]

Almost three hundred years later, refugees from the island nation of Santa Prisca came to Gotham City and believed that God had tasked them with making the city the center of a "Latin Empire." Several of the refugees died, and the survivors returned to Santa Prisca in disgrace.[citation needed]

During the mid-1800s, Gotham City began expanding with the influx of several influent Gothamites. The powerful Judge, Solomon Wayne associated himself with the young architect, Cyrus Pinkney in order to redevelop the city for the Gothamites, with the approval of the City Council. Both men believed in the power of those designs to drive out malevolence, and so built many landmarks such as the Old Gotham Cathedral, the Jezebel Mall and Theater, and the Solomon Wayne Courthouse.[2] Henry Cobblepot, a print magnate, also financially backed Pinkney in order to profit from his works, despite Pinkney being in favor of more artistic and civic structures.[3]

Being in rivalry with Wayne, Cobblepot even gave his approval to the seemingly fruitless construction of Gotham Pioneers Bridge, which connected the city's heart (North Gotham) to the southern parts where few settlements existed. That project was, however, a success, as the new land made available saw businesses thriving. "New Gotham" saw rapid growth, became the home of the Gotham Railyards and soon the industrial and financial heart of city.[4] Pinkney's final work for the city before his official death were the plans of Arkham Asylum, that were commissioned by Amadeus Arkham to treat the insane among Gotham's inhabitants.

During the end of the 1800s, Ra's al Ghul approached Gotham City Hall and proposed a plan to eradicate crime in exchange for the deed to a section of North Gotham, the original center of the city by then in decline. Though hesitant at first, the City Council agreed upon learning that he possessed more gold than they had ever seen. With the Deed in hand, Ra's began the construction of an utopian city that was powered by clean, sustainable energy, that was provided by Gotham's undiscovered Lazarus Pit, a city that he later named Wonder City and exposed to the Gothamites during the 1906 Wonder City Exposition. As the Mechanical Guardians watched over the population and removed any lawbreakers, Gotham's new benefactor began combining arcane chemicals in an attempt to attain immortality. Wonder Tower, while being a symbol of progress, hid a system to collect lightning and power Ra's al Ghul's experiments.

It soon became clear, however, that the Lazarus Pit's miraculous compound came with side effects. Little by little, Wonder City's populace was cast into temporary aggressive insanity, and chaos erupted in the streets. When Ra's failed to counter that new wave of violence, Gotham City Hall declared the exposition a public health hazard, and ensured that every last of its inhabitants were transported to Arkham Asylum. Ra's, meanwhile, had disappeared without a trace after trying to dig his way to the Lazarus Pit, which caused several streets to collapse, and was never seen again. Wonder Tower remained as a symbol of Gotham's bright future, but new buildings were erected atop Wonder City, and hid its terrible failure.[5]

That was the island of the Arkham family which included only the Botanical Gardens and the Arkham Mansion. A member of that family, Amadeus Arkham, euthanized his mother in the Arkham Mansion as a treatment for her dementia and founded the Elizabeth Arkham Asylum for the Criminally Insane - a facility that was dedicated to treating and housing insane criminals.

Over many years, Arkham Asylum developed with new facilities and staff being introduced to improve the housing conditions and the effectiveness of the institution's treatments.

Gotham appeared in Cold, Cold Heart, a week after the Christmas Eve Incident. New Gotham was the only explorable area including Coventry and the Diamond District. However, Burnley was not included due to a large ice formation that was created by thugs with cryogenic weapons.

Batman met with Captain Gordon on the roof of the GCPD Building in Gotham to discuss the breakout attempt at Blackgate Prison.

The Suicide Squad entered Gotham in order to break into Arkham Asylum to find Riddler and his cane, and Batman uncovered that while he searched for a dirty bomb that the Joker planted in the city.

Arkham Asylum resided outside Gotham on Arkham Island. The city itself could be viewed from the asylum, including Wayne Enterprises.

Arkham City was located in Old Gotham. Warden Quincy Sharp became the Mayor of Gotham following an election that he campaigned for eighteen months prior to the construction of Arkham City.

Nine months after the Joker's death, criminal activity had a downfall. As Scarecrow, the Arkham Knight and Deathstroke made an Alliance, the three of them planned to make Gotham into a city of fear and unmask Batman. Scarecrow later unmasked Batman as Bruce Wayne. In retaliation, Batman arrested all the super-villains to the GCPD Lockup to begin The Knightfall Protocol. In Arkham Knight, central Gotham was seen, including three new islands:

After the possible death of Batman, half of the criminal activity from Gotham City's super criminals had been declined. Jim Gordon later became the new Mayor of Gotham.

The Bowery before Arkham City

As seen from Arkham City 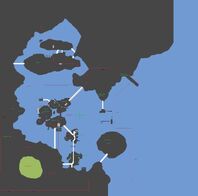