The Gotham City Police Department is the police force that protects Gotham City from crime. Under the power of Commissioner Loeb, the GCPD had long suffered from severe corruption, which James Gordon, sought to eradicate.

However, with the activities of the Batman and the arrival of the Joker which caused the massive decline of Black Mask's power, corruption within the GCPD began to greatly decrease as well.

By the time of A Matter of Family incident, corruption within the GCPD had become very minimal where there were only a very few officials with ties to people like the Penguin or Riddler.

The Gotham City Police Department, led by Commissioner Loeb, was thoroughly corrupt. After Batman shut down all of Carmine Falcone's drug shipments, the GCPD viewed him as a threat due to his opposition against vigilance, and created the Anti-Vigilante Task Force to arrest him with Captain James Gordon as its leader.

Christmas Eve, the GCPD were patrolling Gotham at night. The cops were following orders from Captain James Gordon and Detective Harvey Bullock to capture Batman. Some of the other cops including the Gotham City SWAT Team were a part of a corrupt faction under Commissioner Loeb and Lt. Howard Branden. Loeb was killed back at Blackgate by "Black Mask". With no one else to turn to, they followed the orders of Branden, Loeb's second in command. Branden made a deal with "Black Mask" to kill Batman to collect the $50,000,000 prize. When Batman infiltrated the GCPD Building, he was attacked by Branden and the corrupt SWAT team. When Gordon called the elevator, he found Batman exiting. After a short confrontation about Batman's methods, Branden found them and prepared to fire. Batman dropped a smoke bomb and beat up Branden and his corrupt officers.

The SWAT team led by Branden was hired by Joker to protect him and his gang at the Gotham Royal Hotel. They were assigned to ensure that no one enters the building without express permission. Branden and Gordon showed up just in time to see Batman beat up the Joker and escape in the Batwing. Branden and his men opened fire only to miss and for Batman to escape. Gordon arrests Joker and sends him to Blackgate Prison.

Firefly, an assassin seeking the $50,000,000 bounty, plants four bombs on the Gotham Pioneer's Bridge and threatens to detonate them if Batman doesn't show up. Gordon calls in the GCPD and the Bomb Squad to stop him. After Batman defuses three of the four bombs, the Bomb Squad is able to defuse the bomb and they arrest Firefly.

In Burnley, John DeMarco, a SWAT officer, murdered one of his teammates, Nate Ramo, with his vehicle outside the GCPD New Gotham Precinct, for cutting a deal with Internal Affairs. Batman tracked down DeMarco on the top building with his teammates, interrogated him for what he did to Ramo, and left him to be apprehended.

After Christmas Eve, the GCPD helped to contain the riots at North Gotham but then the bridge entrance was sealed in ice by thugs with cryogenic weapons that were given by Mister Freeze and the path to Burnley was sealed in ice to keep the cops from going anywhere.

Shortly before Valentine's Day, Joker and his gang kidnapped James Gordon and several GCPD officers and brought them to his hideout in the abandoned Sea Gate amusement park, as part of a plan to eliminate Batman's sidekicks, Batgirl (Barbara Gordon) and Robin (Tim Drake). Batgirl and Robin eventually managed to rescue Gordon and the GCPD officers. However while they managed to capture Harley Quinn, Joker managed to escape via parachute.

Batman easily took the Joker to Arkham Asylum, but Joker broke out and Harley Quinn kidnapped Gordon. Batman rescued Gordon, defeated Joker, and the GCPD arrived to take back control of Arkham Asylum.

In Arkham City, Gordon send 10 undercover GCPD cops into the prison, but they all got captured by Penguin. Batman entered the Museum, took down Penguin, and rescued the undercover cops.

The GCPD kept the sight to the Industrial District covered to not let Harley Quinn get out of there. Quinn captured several GCPD officers to set up a trap for Batman to seek revenge on him for Joker's death.

One year after the events of Arkham City, when Scarecrow returned and Batman's deadliest villains united, the GCPD helped evacuate the city and try to stop the criminals.

Mad Hatter rigged a high-pitched signal to go off in several GCPD patrol cars. This knocked them out and allowed the Hatter to kidnap three officers, Katz, McQueen, and Hutch. He tied them up and locked them in the trunks of their own cars. They were eventually saved by Batman.

As Batman defeated Scarecrow, and sent all the villains to jail to begin the Knightfall Protocol.

As the Knightfall Protocol began, Commissioner Gordon retired from his position as he became the new Mayor of Gotham City, with Aaron Cash taking his place as commissioner. 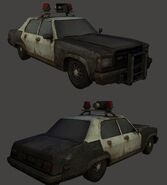