Start a Wiki
A crooked financier who stole millions of dollars, Warren White thought he'd scored a legal victory when his insanity plea went through. But when he got to Arkham Asylum, he realized his mistake; driven insane by the other inmates, he was also disfigured by an encounter with Mr. Freeze that left him without hair, a nose, ears, or lips. Calling himself the Great White Shark, he filed his teeth into fangs to more perfectly resemble his new namesake. Putting his financial skills to use, he has become a major player in Gotham's underground crime scene, running a number of rackets from his cell in Arkham.

During the events on Christmas Eve, Warren White hasn't became criminal. It is presumed that he has not yet committed any crime.

When the asylum was reopened White was placed in Arkham. Later he was attacked by Mr. Freeze and became Great White Shark.

Great White Shark was captured by Batman and was taken to Arkham Asylum. Where Warren was under the care of Dr. Young and Dr. Cassidy.

He was not seen directly in the game, however, a jar with his name on it, as well as containing his lips, ears and nose, appears in the morgue. He escaped the island in confusion of the Joker's Takeover along with Maxie Zeus, Ratcatcher, Humpty Dumpty, Catwoman, Calendar Man, Ventriloquist, Tweedledum and Tweedledee, Firefly, Killer Moth, Penguin, Riddler and Mr. Freeze.

After the event at the Asylum, Hugo Strange had Great White Shark moved to Arkham City.

In Arkham City, there is a building with "W White" on it, which most-likely stands for Warren White. It was revealed he survived Protocol 10.

White isn't mentioned again. The Arkham Knight attempted to kill him in his former building with explosives however this failed.

In the G.C.P.D evidence room, Warren White's body parts are on display. Aaron Cash will give a commentary on him.

BIT A GUARD LAST WEEK! Psychological Profile: At best a mild psychopath upon admittance to the asylum, White has graduated into a full-blown case of antisocial personality disorder, partly due to maltreatment at the hands of his fellow inmates. After severe facial disfigurements by Mr. Freeze left him without lips, nose, ears, or hair, White filed down his teeth in an attempt to further differentiate himself from others. His sense of self is now completely dependent upon his identity as a dangerous criminal.

Some of the guards are convinced that he is running criminal rackets out of the asylum. This has no bearing on his treatment and could provide valuable data regarding his condition.

A jar with some of White's missing parts 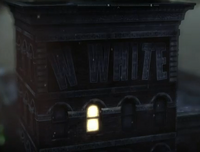 Retrieved from "https://arkhamcity.fandom.com/wiki/Great_White_Shark?oldid=87631"
Community content is available under CC-BY-SA unless otherwise noted.