Harley's Thugs were Joker's former henchmen who appeared in Harley Quinn's Revenge and in Batman: Arkham Knight. The thugs were sent to complete specific missions that were commanded by their leader, Harley Quinn, who became crazier, meaner, and more independent since The Joker's death and sought revenge on Batman, whom she blamed for it. Their main mission in Harley Quinn's Revenge was to kill Batman. In Arkham Knight, they sought to free the new Jokers at Panessa Studios.

Harley Quinn was mourning over the death of her beloved Joker. Harley blamed Batman, and her main priority was to kill him like he killed Joker. To achieve her goal, Harley hired a group of deadly henchmen that were called "Harley's Thugs". These thugs seemed to be a little frightened about Harley's lethal intentions and actions, but remained loyal as well as obeyed her commands to kill Batman or whoever else stood in her way such as Robin.

The thugs were given new uniforms, this time based of playing cards as opposed to clowns. Harley mourned the Joker for months, making a long-time minion doubt she was right for leadership as she kissed a television of with Joker's face on it in her office. Deciding to bomb it, he was surprised that the TV told him it was a bad idea. He then realized to his horror that Harley had been on to him the entire time and promptly died from a whack to the back of his head from her baseball bat.

Nine months after the events of Batman: Arkham City, Harley's Thugs, Penguin's Henchmen and Two-Face's Gang all teamed up, but they didn´t seem to cooperate with the other's crew. Their mission was to help Harley free the new Jokers at the Movie Studios.

Harley's Gang were a bit more vicious looking than any of the other thugs in the game. Some wore similar clothing to that of Penguin's Thugs, and others wore singlets, full body clothes, and armored pieces that resembled football gear. These thugs roamed the Industrial District as the rest of Arkham City was off limits in Harley Quinn's Revenge. Harley's Thugs also used the same stealth, combat, and weapon tactics as the other thugs in Arkham City.

Three of Harley's Thugs sealing the door to the Shipyard 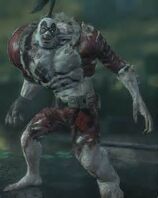 Harley's Thug about to be taken down by Robin

Retrieved from "https://arkhamcity.fandom.com/wiki/Harley%27s_Thugs?oldid=88852"
Community content is available under CC-BY-SA unless otherwise noted.