Start a Wiki
An obese, bald man nicknamed "Humpty Dumpty" for his egg-like form, Humphry Dumpler is obsessed with taking things apart and putting them back together. His crimes at first were minor break-ins, leading to small mechanical items no longer functioning due to Dumpler's inability to adequately reassemble them after taking them apart. But soon his obsession grew to the point that major disasters occurred in Gotham, and Dumpler's crimes also extended to a gruesome attempt to "fix" his abusive grandmother by dismembering her and then attempting a Frankenstein-like reassembly. At Arkham he is a model inmate, his quiet nature and imposing physique inuring him to the madness surrounding him.

During the events on Christmas Eve, Humphrey Dumpler was presumably spending Christmas with his family (it is unknown if he had any besides his grandmother, though). It is presumed he has not yet committed the crime that caused him to be sent to Arkham, as the facility is not yet opened at this time.

Humpler was sent to Arkham Asylum for treatment and to bring back his sanity.

Somewhere between Arkham Origins and Arkham Asylum, Dumpler was arrested and sent to Arkham Asylum, when he tried to "fix" his abusive grandmother by dissembling her and trying to put her back together as a Frankenstein-like form. At Arkham, he was presumably under the care of Dr. Young.

Although he doesn't appear in game, a pile of Humpty's broken wooden toy soldiers can be found in Botanical Gardens. Humpty was possibly in the Botanical Gardens before or during Joker's Takeover, it is unknown. In the chaos Humpty Dumpty escaped the island with other villains Mr. Freeze, Great White Shark, Penguin, Ratcatcher, Maxie Zeus, Riddler, Calendar Man, Tweedledum and Tweedledee, Firefly, Killer Moth, Ventriloquist, and Black Mask.

Humpty was possibly later captured by Hugo Strange and was taken to Arkham City because Arkham Asylum was closed down by Mayor Quincy Sharp.

While Dumpler doesn't appear in Arkham City, it's unlikely that an individual as unskilled as himself evaded capture. He was killed during Protocol 10.

Humpty was killed during Protocol 10. He wasn't mentioned anymore.

Psychological Profile: Developmentally disabled, with an IQ of just under 70 and symptoms of emotional retardation and regression, Dumpler is also extremely obese. Dumpler's most intriguing mental disorder is his obsessive-compulsive fixation on fixing broken items. This manifested itself most notably in a fascinating (albeit horrific) attempt to "fix" an abusive relative through dismemberment and reassembly.

His imposing physique intimidates many orderlies, guards, and inmates, but his simple mental state makes him easy to manipulate and control, so I find no reason to be afraid of him. 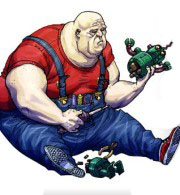 Retrieved from "https://arkhamcity.fandom.com/wiki/Humpty_Dumpty?oldid=86463"
Community content is available under CC-BY-SA unless otherwise noted.