Thomas Elliot was the heir of the Elliot family and the childhood friend of Bruce Wayne. After orchestrating a car accident to kill his parents and inherit their fortune, Thomas developed a pathological hatred for the Wayne family when the patriarch, Thomas Wayne saved his mother's life, and when Bruce inherited his family's wealth after the murder of his own parents. An incredibly skilled surgeon as an adult, Elliot planned an elaborate revenge scheme on Bruce Wayne by re-configuring his own face to resemble Bruce's in the attempt to steal his fortune. He first disguised himself as the villain known as Hush, with his face covered in bandages, and plotted to finally take his revenge against Wayne.

He is in the Gotham's Most Wanted Side Missions: Identity Theft and Friend in Need.

Thomas Elliot and Bruce Wayne were childhood friends, and, unknown to Bruce, dark reflections of each other. Named after Bruce's father, Thomas idolized the great surgeon.

A childhood psychopath, Elliot actually tried to kill his parents so he could inherit their fortune. His plan failed partly due to the surgical skills of Thomas Wayne, and his mother survived, which led to Elliot to blame the Wayne Family for his failure and to seek revenge against them.

After the deaths of Bruce's parents, Thomas grew jealous of his old friend getting his fortune ahead of him. By this time he was known as Bruce's classmate in school. Sometime after the Waynes' funeral, he visited Bruce at the Wayne Manor. There he told Bruce that their teacher Ms. Hyslop had told Thomas and the other students that they had to be kind to him. Bruce replied that he had noticed, and that it had gotten boring. Thomas then 'joked' that he wished his parents were dead so he could be a billionaire like Bruce. This provoked Bruce to laugh.

Later, Thomas sought out a medical degree, becoming exceptionally skilled in the field. He was known to have received education from Harvard at some point. Acting benevolent, Thomas bided his time for years, waiting for the chance to get back at Bruce Wayne.

Although he did not appear in Origins, Elliot was mentioned by Alfred. When Batman listened to Alfred's final Wisdom conversation in the Batcave, he told Bruce that Thomas had called to celebrate a surgery that he had just completed to separate conjoined twins.

Elliot continued to work as a successful surgeon, while also still secretly planning his revenge against Bruce Wayne. When Arkham Asylum was opened again, Elliot started working there as a doctor.

At some point, Elliot was abducted by members of Joker's gang and brought to The Joker. He was assigned to be the one responsible for the surgery that separated Mr. Hammer and Sickle, who were hired by the Joker, in exchange for the finances that would fund his later surgeries.

Even though Hush didn't appear in the Asylum itself, you could find his name on a timetable on the second floor of the Surgery Room at the Medical Facility as you rescue Dr. Adrian Chen. Scan the timetable to solve a riddle and unlock his biography.

Batman would later remark being surprised at seeing Elliot's name on the timetable in the Asylum. Ever since then, Batman noted that he would find more and more bodies with questionable medical work done to them that all pointed back to Elliot.

Around winter after Arkham City opened, Hush decided the time to implement his plan had come; he tracked down three men who had facial features similar to Bruce Wayne and removed their faces, leaving their heads bandaged up, earning him the name Identity Thief in the newspaper. However, some of the people he targeted did not have the right parts he needed, either being not the right size or malformed. As a result, Hush kept the parts that were accurate frozen in a medical container.

Hush was transferred to Arkham City to be part of the Medical Center staff. However, he made a point to never socialize with the rest of the staff, keeping to himself unless he needed their help with medical procedures. He also took up residence in an apartment next to the Solomon Wayne Courthouse. To Hush's surprise, some of the patients turned out to be Political Prisoners; three of whom had the remaining facial features he needed to complete his copy of Bruce Wayne's face.

To prepare for surgery, Hush began stealing painkillers from the Medical Center and stockpiling them in his hideout. When he had enough, Hush stalked his targets and killed them. He hid their bodies until he could dispose of them in the gang war chaos. With the rest of the prep work done, Hush implemented the final step: cutting off his own face to replace it.

Doctor Adam Hasakani found Hush laughing in a corner, holding his container. Believing the stress of the job made him snap, Adam sedated Hush and bandaged his head to keep blood-loss from killing him. Hush ended up in the Medical Center, where Adam tended to him. Adam was unable to get Hush to let go of the container, leaving him worried as to what was in it. Hearing the news about Bruce in his sleep, Hush was annoyed. When the Riddler attacked the church to take hostages, Hush woke up and escaped into Arkham City.

Using the various faces he stole, Hush crafted one that looked like Bruce Wayne onto himself, dying his hair in the process. He also somehow managed to make his fingerprints match Wayne's as well. Hush dumped his first victim, being spotted by someone who mistook him for Bruce. He accidentally left a scalpel with his second victim, leaving fingerprints. To get rid of the third body, he instructed a thug to use bleach to remove evidence.

Batman tracked six murders back to Elliot after he scanned three corpses, interrogated one political prisoner who said that Elliot looked like Bruce Wayne, uploaded the fingerprints that were Bruce Wayne's, and interrogated one inmate who was told by Hush to clean up a third victim with bleach who then told Batman Hush's location.

When Batman entered Hush's Hideout (in Park Row by the Solomon Wayne Courthouse and below Catwoman's Apartment), he learned that Elliot had created a face that looked exactly like Bruce Wayne's (minus the surgery scars) and even managed to change his prints and voice to that of Bruce's. Hush trapped Batman in his surgical room and left Arkham City. Batman informed Oracle of that and said he would track him down the next day.

As it turns out, Hush's new face was part of a plan that had taken the Arkham Knight years to put into action. Thinking that he was truly Bruce Wayne, the Ratcatcher tried to kill him, but was disappointed when Hush's bandages came off and his scars were revealed. Two GCPD officers tried to help Hush, and also believed that he was Wayne, but were overwhelmed by Ratcatcher's rats. The Arkham Knight, who'd been following Hush, saved him from Ratcatcher and both of them escaped before Batman showed up.

In a safehouse, Hush was patched up and given a sample of Clayface mud that would heal his surgery scars on the promise that he wouldn't reveal his new face again until the plan was ready.

For a time, Commissioner James Gordon expected people such as Hush to come out of the woodwork to drag Gotham into chaos in the wake of Joker's death. After a while, Gordon suspected he may have been wrong.

As it turned out, Gordon's fears about Hush did come to fruition, albeit several months after his initial prediction.

Hush remained behind during Scarecrow's attack and at some point infiltrated Wayne Tower, and gained access to Lucius Fox's Office on the top floor.

After he failed to gain access to a computer due to security protocols that he hadn't foreseen, Elliot took Fox hostage, and used his retina to access the Wayne Enterprises mainframe. Subsequently, Fox's assistant, Clara Saberton, entered the room to investigate the commotion, but Hush scared her off by shooting at the door with a gun.

He then began transferring Wayne's funds out of his accounts. Before he could actually do anything, Batman entered. Elliot demanded that Batman find Bruce Wayne and bring him to the tower, otherwise he would destroy the building. Batman tried to reason with Elliot, and reminded him that the Waynes' had stood by him after the car crash that killed his father. Hush then inadvertently admitted to deliberately causing the crash and let out his resentment at Bruce Wayne for getting his fortune handed to him.

Batman removed his mask, revealed his identity to Hush, and dared his former friend to take his best shot. Startled, Hush attempted to shoot Batman, but the Dark Knight quickly disarmed him. Fox assaulted him with a decanter, which damaged his face, and Batman then choke slammed him through Fox's desk. After he knew that he couldn't deliver Hush to the GCPD without putting himself under investigation, Batman instructed Fox to lock the unconscious Elliot in the vault underneath the building, informing him and Alfred that Elliot would be put on trial and brought to justice at a later date, once the night was over.

Thomas Elliot is a vengeful sociopath who developed an unbridled hatred towards the Waynes, namely his former best friend, Bruce, whom he grew to resent due to him obtaining his family fortune through inheritance. Elliot never inherited his family's money when Thomas Wayne saved his mother. Even in childhood, Elliot was cunning but his murderous, sociopathic desires proved deep-rooted enough to plan his parents death and stage it as an accident. His skills only grew as he got older, becoming a gifted surgeon. His sanity and morality, however, seemed to vanish further as he insanely laughed while cutting his own face after enlisting into Arkham City, then murdering and surgically removing the faces of six inmates. Elliot was willing to mutilate himself to assist with his revenge against Bruce Wayne by replicating Bruce's face and fingerprints to frame him and destroy his reputation. He was intensely proud of his work, describing it as his "Michelangelo's David" and his Mona Lisa.

(Unused) You always had a strong secret, Wayne. We both did. 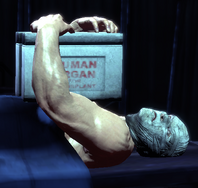 Hush in the medical center holding a mysterious box

Hush in the Church Medical Center in Arkham City

Hush, with Bruce Wayne's face at his hideout in Arkham City