The Iceberg Lounge was a trendy nightclub that was owned by Oswald Chesterfield Cobblepot, a.k.a. the Penguin.

Cobblepot served as host and booked numerous singers and musicians to perform as well as employing beauties to run the club for him in his absence. Behind the scenes, though, Penguin still ran his criminal enterprises, laundered stolen cash, and traded on information.

Penguin was planning the Iceberg Lounge at the time of Batman: Arkham Origins, as revealed on the blueprints in his office on the Final Offer.

Penguin decided against building the Iceberg Lounge and decided to buy an already completed building. When The Cyrus Pinkney Institute for Natural History went up for auction, Cobblepot bought it. He refurbished it into the Iceberg Lounge. He added a pool for his pet shark, Tiny, a torture chamber, a gladiator pit, a casino, an armory, and a war room. He also stumbled upon a secret basement that held Solomon Grundy.

During the Lounge's grand opening Penguin invited Joker and Harley Quinn. After a brief mishap with a spilled drink from a waitress, Joker proceeded to spray her with acid, grievously wounding her. Outraged at being humiliated, Penguin sent his men after the duo, causing a fight between them and Joker's henchmen who threw pies at Penguin's guards. The incident caused months of bad publicity and vacancy, although eventually, the crowd began to return to the Lounge.

Penguin was approached by Amanda Waller to let a group of covert operatives stay at his establishment and to provide them with the weapons and means to break into Arkham Asylum. Cobblepot agreed to these terms in exchange for a massive pay day in advance. The Suicide Squad arrived at the Lounge and Penguin greeted them all, especially Deadshot, calling him the best assassin he has ever seen. When he saw Harley Quinn, he pulled out his umbrella ready to kill her for stealing a truck of cigarettes with The Joker and driving it into the river. Deadshot defused the situation, saying that killing her would be bad business. Cobblepot realized the assassin was right and let her live, on the condition that Waller never call him again.

In William North's Office within the Intensive Treatment Center at Arkham Asylum, there was a poster that advertised the Iceberg Lounge.

When Old Gotham was set for foreclosure for Arkham City, Penguin refused to vacate the premises. As construction on the massive wall enclosing the district continued, Penguin was asked several times by City Hall to leave. As the wall was nearly finished, Mayor Sharp decided to give Penguin one last chance. Sharp gave the police the go ahead to forcefully remove the midget gangster and his cronies. Cobblepot responded with massive gunfire, killing three veteran officers. Sharp decided to finish the wall and leave the midget to his own devices.

Penguin used the Iceberg Lounge as his base of operations for the Arkham Gang War. He plotted on taking out Joker and Two-Face and ruling Arkham City with an iron fist. To hurt Joker, Penguin had Mr. Freeze, who was working as Joker's doctor, kidnapped and taken to the Lounge. Commissioner Gordon sent in ten undercover GCPD officers to investigate Penguin's activities. Professor Hugo Strange informed Penguin about the officers and this led to Cobblepot to decide to torture and kill these cops.

When Batman infiltrated Arkham City in order to investigate Strange's activities, he came across Penguin's Henchmen. Batman decided to go to the Lounge, save the police, Freeze, and stop Cobblepot. He succeeded saving them one by one. As Batman went deeper into the Lounge, the Penguin revealed a trump card, Freeze's Freeze Gun. Penguin froze the officers and hid them around the museum. He then sealed himself in the VIP area of the Lounge. After saving everyone, Freeze told Batman how to temporarily disarm his Freeze Gun. Batman took the Disruptor and headed toward the VIP area. He found Penguin standing on top of a table with the gun and two hostages. After fighting his way to Penguin, Batman activated the Disruptor. He then punched Cobblepot and threw him into a table. While Penguin plead for his life, he pulled out a detonator. This destroyed the floor Batman was standing on and dropped him into Grundy's lair. Batman fought Grundy and eventually defeated him. This battle allowed Penguin to get his grenade launcher and fire at Batman. Batman went up to Penguin, beat him up, and Freeze placed him in a exhibit in the Trophy Room.

Later that night, Two-Face infiltrated the museum section of the Lounge and claimed it as his territory. Catwoman, whom he recently tried to have killed, broke into the museum, attacked Two-Face's Gang, and took out Two-Face herself.

The undercover GCPD officers sealed the doors and sought refuge in the VIP area after the defeat of Penguin. Batman returned to them to take a device from Officer Elvis Jones, which helped him detonate mines.

The Iceberg Lounge was presumably shut down after the Arkham City was shut down.

City Hall decided to reintegrate Arkham City back into Gotham's limits, including the Iceberg Lounge. It was possibly put up for auction once more.

A Poster for the Iceberg Lounge in William North's Office at the Intensive Treatment Center on Arkham Island. 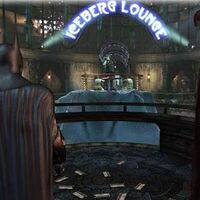 Batman vs. Penguin at the Iceberg Lounge in Arkham City.

Batman uppercutting Penguin into the air at the Iceberg Lounge in Arkham City. 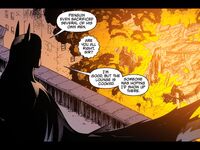 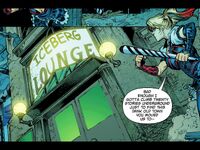