The Industrial District is a very large part of Old Gotham, and eventually, Arkham City. It consisted of the Joker's Base of operations, Zsasz's Hideout, and the building in which Hugo Strange locked Nora Fries. The Steel Mill was also where most of Batman: Arkham City took place.

After all of the criminals where thrown in the super prison known as Arkham City, most took on their own base. The Joker, Harley Quinn, and their men made their main base at the Steel Mill. It was one of the most important and explored parts of the game. There's also Victor Zsasz's Hideout, the place where Nora Fries was locked up by Hugo Strange, a Giant Ferris Wheel where Batman found Azrael, and a boat owned by Falcone Shipping that was flooded with Scarecrow's Fear Toxin and a dead Joker Henchman. 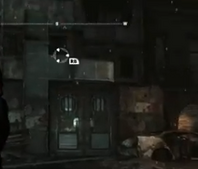