"Initiation" is a DLC Challenge Map pack for Batman: Arkham Origins. The narrative follows Bruce Wayne as he learned the martial arts from Kirigi, a martial arts master. It was released to the public on December 3rd, 2013.

"Initiation" DLC was first announced as part of the Batman: Arkham Origins Season Pass. It was a series of story-driven Challenge Maps, much like the Robin/Black Mask and Nightwing bundles for Batman: Arkham City The story took place before the events of Arkham Origins and followed Kirigi as he tested Bruce Wayne's skill in his dojo.

The DLC added Bruce Wayne as a playable character and two new skins: "Initiation Bruce Wayne" and "Vigilante Bruce Wayne". The map pack also featured both Combat and Predator Challenge Maps. The dojo had several locations, both indoor and outdoor.

Before he would become the famous Batman, Bruce Wayne went on a multi-year journey to learn the many forms of Asian martial arts. He went to China, Japan, Thailand and eventually Korea. In North Korea, Wayne found a secret Korean castle where he met the Martial Arts Master: Kirigi. Kirigi took Bruce in as his servant and let him train with his students in Tokagure Ryu, and other Shinobi.

Kirigi knew an art that was similar to the Japanese Ninjutsu. For one year, Wayne trained under Kirigi in the ways of the shadow warrior how to use the shadows, devote himself to an ideal, learn patience, agility, deception, theatrics and the power to fight 600 men and finally how to use fear." Finally, Kirigi himself wanted to test Wayne in several deadly trials in hand-to-hand combat and stealth until eventually Wayne fought Kirigi's best student: Shiva, to see if he was worthy of his final instruction.

Depending on how the player operated as Bruce Wayne during this performance, there were three different endings: 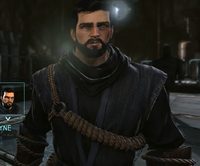 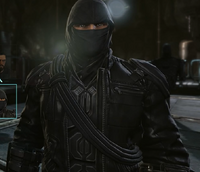 The beginning of Initiation.

Boss Battle: Bruce Wayne vs. Shiva.
Add a photo to this gallery

Retrieved from "https://arkhamcity.fandom.com/wiki/Initiation?oldid=82842"
Community content is available under CC-BY-SA unless otherwise noted.