An Interview Tape is a tape that could be found across Arkham Asylum and unlocked in Arkham City, which are recorded tapes of patient interviews with the Arkham Inmates.

In Batman: Arkham Origins, a tape could be found in Bane's lair. It detailed his troubles with both Venom and TN-1. Although not technically interview tapes, the Enigma Datapacks had something in similar in practice, which featured several recorded conversations exposing any skeletons in their closets.

In Batman: Arkham Asylum, the tapes were scattered across the island and inside the facilities with interviews held by Doctors Gretchen Whistler, Sarah Cassidy, Stephen Kellerman, Harleen Quinzel and Penelope Young. These doctors interview the Joker, Riddler, Killer Croc, Poison Ivy, Victor Zsasz and Scarecrow.

In Batman: Arkham City, the tapes could only be acquired by completing Riddler Challenges. The tapes, recorded by Professor Hugo Strange, record the Joker, Riddler, Mr. Freeze, Catwoman, Mad Hatter , Penguin and Two-Face. Radio interviews with Mayor Quincy Sharp could be found also and the telephone exchanges with Victor Zsasz could also be found.

In Batman: Arkham Knight, the tapes were found in a similar manner to Arkham City. The tapes had Riddler, Penguin, Scarecrow, Harley Quinn, and the Arkham Knight on them, and Dr. Alex Sartorius taping a confession about Simon Stagg. 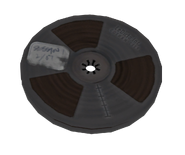