Joker's Henchmen were enemies who joined up with The Joker in Batman: Arkham Origins, Batman: Arkham Asylum, Batman: Arkham City, Batman: Arkham Knight and Batgirl: A Matter of Family. Joker's Gang was a large group of thugs who worked for the Joker as well as his henchwoman and right hand, Harley Quinn. They were generally made up of very violent and mentally disturbed criminals. The Joker had brutal initiation standards, and forced them to survive his death traps or murder members of their own family before they were even allowed to be a part of his gang. People who were associated with them were: Victor Zsasz, Bane, Clayface, and Poison Ivy before she turned against the Clown Prince of Crime. They were ruthless criminals who feared and hated Batman, and wanted him dead the second that they caught sight of him. In both locations, they managed to control locations as well as get into the Armory. Scarecrow was possibly associated with that gang too. Frank Boles was a hired mercenary who worked for Joker until he was killed by him when he discovered that Batman wasn't far behind him. The Joker regularly mistreated his fellows, and sometimes simply killed them for entertainment, however, they were fiercely loyal to him.

When Batman confronted or encountered them, he would battle them, aggressively defeat them, temporarily stop them from breathing and broke their bones. They often wore makeup that made them look like clowns as well as colorful outfits in Arkham City. In Arkham Asylum, some were killed by the Joker himself when Smilex was released and later when testing bombs. During the events of Arkham City, the gang engaged in a brutal gang war against the gangs led by the Penguin and Two-Face. Some thugs also secretly worked for The Riddler and managed to infiltrate the Joker's gang. They were interrogated by the Dark Knight for information about him.

Following the Joker's death, many of them stayed on and accepted Harley Quinn as their new leader, while others fled and joined other gangs.

The Joker's Henchmen were the most common enemies in Arkham Asylum, and a hostile faction in Arkham City and Arkham Origins.

The Joker's Henchmen were notable for wearing clown makeup and masks along with hoods, singlets, or, in Arkham Origins's case, suits. They were loyal to the Joker and Harley Quinn, who acted as a second-in-command. With most of the gang was made up of murderers, rapists, and psychopaths, that gang, while not the most skilled, was the most bloodthirsty and vicious due to Joker and their former leader, Black Mask who was an incredibly sadistic influence.

In Arkham Asylum, they controlled the whole of Arkham Island as a result of the Joker's riot, and the player had to defeat hordes of them to progress through the main storyline.

Joker's Henchmen could be found dotted around the whole of Arkham City, and usually roamed in small packs, but the majority of them were situated in and around the Industrial District as they performed commands from the Joker and Harley Quinn. Among the Joker's Henchmen was one half of the Abramovici Twins, Mr. Hammer. After Joker's death, Harley Quinn reunited the gang and she named herself as the new leader.

The Joker's Henchmen in Arkham Origins were first seen working for Black Mask. Once the Joker came to Gotham City, he impersonated Black Mask and usurped his gang. The henchmen that flipped their allegiance to the Joker were spared and began working for him. They first appeared when Batman confronted Joker at the Gotham Merchant's Bank. While they held Batman at gunpoint, they shed their mobster masks and replaced them with clown masks.

From then on, the henchmen populated the Industrial District, and around the Steel Mill. They were stationed inside the Steel Mill, the Royal Hotel, and Blackgate Prison. Throughout the game, they were armed with shotguns, assault rifles, sniper rifles, and melee weapons like pipes, knives, and baseball bats.

At the conclusion of the game, many of the Joker's Henchmen were locked up in Blackgate. One of Joker's men, Ian Chase, murdered a couple, Horace Riley and Clarissa Rodriguez, who were two friends of Bruce Wayne's, at Crime Alley (where Thomas and Martha Wayne were murdered by Joe Chill). Batman tracked down Chase to the Industrial District and apprehended him (albiet almost killing him) to the GCPD for murdering the couple.

Joker recruited an elite force of henchmen, who fought Bane's Henchmen in a gang war.

- A fast flying airship that explodes on contact with a character or surface.

Joker's Henchmen were spread across the Administration section of Blackgate. After they escaped from the Cell Blocks, Joker's Henchmen guarded Warden Joseph, and the others traveled to the Industrial section and protected the Line Launcher technology that Batman needed to stop Joker.

A few others watched Joker fight Batman. When Joker released his Joker Toxin, they either fled, passed out, or died. Early in the game, one individual tried to convince Catwoman to join Joker.

When Quincy Sharp had Arkham Asylum reopened, most of Joker's Henchmen and the other criminals were moved there.

The Joker's Henchmen were all imprisoned at Blackgate, when a fire, orchestrated by the Joker, burned the prison to the ground. All of the Blackgate Prisoners were then transferred to Arkham Asylum while the prison was rebuilt. It was during that time, that the Joker was captured by Batman, and launched a takeover upon all of Arkham Island. Nearly every hostile thug in the game was loyal to Joker and his lieutenant, Harley Quinn. After Joker was defeated, all of the henchmen were taken back into custody after the GCPD retook control of Arkham Island.

After the riots at Arkham Asylum, Mayor Sharp opened up Arkham City, an open-air prison facility that was in the middle of Gotham. All of the Joker's Henchmen from Arkham Asylum were transferred there, and quickly rejoined their old gang. Many other prisoners in the city joined up with Joker's gang, whether it was purely out of necessity, or for pleasure.

During their time in the prison, Joker's gang entered a bloody turf war with other gangs that belonged to Penguin and Two-Face, respectively. Due to Joker's illness, the henchmen mostly got their orders from Harley Quinn, though they generally hated and disrespected her.

When Batman appeared in Arkham City, the henchmen were patrolling the Industrial District, and around the Steel Mill, which acted as their headquarters. When Protocol 10 started, some of Joker's gang were killed by the TYGER helicopters that were targeting everyone in the prison. After Joker died and Arkham City was evacuated, Joker's Henchmen were taken into custody.

As expected from a gang with the clown prince of crime as their leader, the Joker's gang was by far the most unpredictable and dangerous for anyone in contact with the gang. Members were frequently punished for failures by being violently killed and captured enemies were routinely tortured to death. Recruitment for the gang was also extremely dangerous for prisoners looking to join as the Joker would often let anyone join one day and order his men to shoot anyone who approached the mill on other days. Even people outside of the prison were not safe as doctors and other medical personal were often kidnapped in an effort to cure Joker's sickness and anyone deemed useless were either killed, tortured to death, or pitted against Mr. Hammer for the amusement of the gang.

After Harley Quinn escaped the temporary holding facility that she was placed in following the destruction of Arkham City, she reassembled her old gang and headed back into the quarantine zone. The gang took several GCPD officers hostage, and held them in either the Steel Mill, or in the Shipyard. The gang managed to trap Batman, but were defeated when Robin came after him.

It should be noted that following the Joker's death, the thugs had gained respect for Harley. They followed Harley's orders without question, and a few even voiced concern for her mental health.

A goon with a gun to a paramedic. 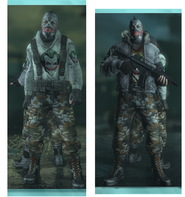 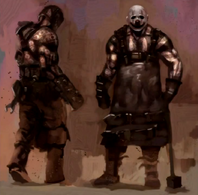 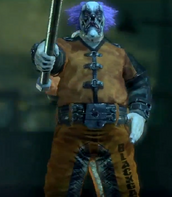 Joker and his henchmen.

Joker and his thugs.

One of the Joker thugs. 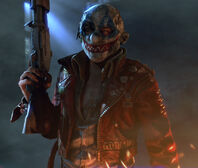 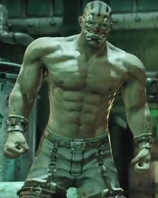 Joker's Henchman #2
Add a photo to this gallery

Retrieved from "https://arkhamcity.fandom.com/wiki/Joker%27s_Henchmen?oldid=93284"
Community content is available under CC-BY-SA unless otherwise noted.