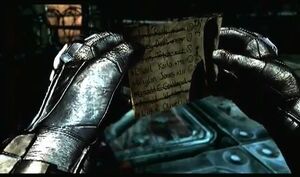 The Joker's Party List is a list of potential Arkham Asylum inmates that The Joker hoped to "invite" onto Arkham Island to confront Batman during the island's takeover.

After he confronts and defeats Harley Quinn in Extreme Incarceration at the Penitentiary, Batman comes into possession of the list which he took from her. On the list, Harley made pictures about her and the Joker falling in love and also about Batman's grave site. Several names on the list are marked through and have frowning faces beside them. Those that aren't struck through, have smiling faces beside them. When Batman asks what the faces mean, Harley tells him to figure it out himself.