Drury Walker was a minor criminal who adopted the identity of Cameron Van Cleer, a master criminal who in turn masqueraded as the costumed super-villain Killer Moth. He was a hired gun for Gotham's gangsters, but his ingenious weaponry, including his cocoon gun, does little to protect him from regular defeat at the hands of the Batman.

Sometime following the defeat of Black Mask during the events on Christmas Eve, Drury Walker checked out books about moths from Barbara Gordon and staked out her and her father, the newly promoted Commissioner Gordon, which Barbara noticed.

Later a GCPD panel was held that proved Batman was simply a man with gadgets not some 'paranormal entity'. Killer Moth crashed it to advertise his services with a free trial of killing Commissioner Gordon while his henchmen kept Batman preoccupied on the other side of Gotham. Barbara quickly put on the sample Batman costume, managed to defeat Killer Moth's Henchmen, and disarmed the villain.

After he realized that his plans were falling apart, Killer Moth threw Gordon off the rafters to kill him and used that as a diversion for his escape. As Barbara saved her father, Drury made his escape, and tried to calm himself down by saying that Batgirl was just a girl in a suit, like Batman, who happened to arrive just in time and subdued him.

Drury was sent to Arkham Asylum when it was reopened, where his weaponry and other attributes were taken from him and put in the storage room, next to Firefly's (where it was seen by King Shark when the Suicide Squad invaded the madhouse).

Before Joker was brought back to Arkham Asylum, Killer Moth was under treatment at the asylum and was one of the many inmates who escaped Arkham Island in the ensuing chaos.

During his time at Arkham Asylum, Killer Moth had killed two inmates and Batman later discovered one of their remains sealed in a cocoon.

After Halloween and Batman's presumed death, Killer Moth felt that it was safe to resume his crimes again. However, while committing his crimes, Killer Moth crossed paths with the new vigilante, the Red Hood, who killed him. 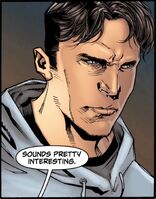 The skeleton hanging in the Aviary

Retrieved from "https://arkhamcity.fandom.com/wiki/Killer_Moth?oldid=86714"
Community content is available under CC-BY-SA unless otherwise noted.