The League of Assassins were a group of highly trained Assassins as well as spies. The Arkham Games mainly dealt with one part the League. One sect of the League was led by Talia al Ghul, and this sect consisted of only women. They were quick, skilled, and quiet when it came to gaining information and battling enemies. Although they honored Ra's al Ghul, the assassins took their orders from Talia.

After the deaths of Ra's and Talia in the Arkham City Incident, Nyssa Raatko took control of a rebellion and entered a war against a group of loyalists who intended to resurrect Ra's once again.

Long before any Arkham Incident, the League of Assassins was formed by Ra's al Ghul to bring justice and order to the world through any means, by destroying civilizations, injustice, and killing to restoring balance.

In Batman: Arkham Origins, the women in the League appeared as agents of the deadly Shiva, rather than of Talia al Ghul. They first appeared during Shiva's Gotham's Most Wanted Mission, and ambushed two corrupt police officers. One of the officers shot one of the Assassins, before he fled. The Assassins kidnapped the other one and held him hostage in a shopping center, and waited for Batman to arrive. When he did, he defeated them and rescued the officer.

They reappeared in the last leg of Shiva's mission, at the confrontation at Sheldon Park in the Wonder Tower Lobby. Shiva called on her ninjas to assist her in fighting Batman.

Batman may have encountered a Crime in Progress, which was an ambush by several of the League's assassins.

On the night of the riot at Arkham Asylum, a small band of Assassins snuck onto Arkham Island unseen and stole the body of Ra's al Ghul from the Morgue in order to resurrect him in Arkham City.

Before the opening of Arkham City, the League resurrected Ra's al Ghul.

The League of Assassins played a key role in the game, and were quite difficult to track and defeat. An assassin first appeared in the Museum where Penguin collected specific items and did most of his business. She was trapped in an exhibit case and was posing as a collection. It was unknown how she was captured, but it was most likely that she was trying to snoop in on the Penguin to see what his plans were. Later, she escaped after Mr. Freeze slammed Penguin up against the glass of her exhibit, cracking it, allowing her to break the glass the rest of the way. Batman then followed a blood trail that the assassin left as she had cut her shoulder during the escape. Batman followed the trail and eventually caught up with the assassin. Robin then appeared to help battle the assassins. One of the assassins suddenly held a sword up to Batman's throat and told him to call Robin off. Batman's plan was to put a tracker on her so he could follow her to her base of operations and eventually find Ra's al Ghul. The assassins appeared every time Batman traveled back to the abandoned Wonder City.

When Ra's and Talia died, the league left Arkham City, taking the bodies with them, and left almost no evidence. Although the GCPD found Ra's al Ghul's sword, Talia al Ghul's Sword and a destroyed Lazarus Pit proved that the League of Assassins was in the prison.

The League attempted to revive their master with an impure Lazarus source. It brought him back, but just barely. He was a mentally incompetent zombie with according to the machines he was hooked up to had a heart rate of 4 beats per minute and respiration (breaths per minute) of 1. Several assassins suggested ending his misery, but others refused to do so. This resulted in a civil war among the League breaking out. The Loyalists desired to bring their master back, while the Rebels wanted a new Demon's Head.

On Halloween Night, Alfred alerted Batman that a GCPD officer just witnessed two "crazy ass ninjas" fighting on Miagani Island. Batman investigated and found two dead ninjas wearing different outfits and a sword with blood on it. He followed the blood trail to Elliot Memorial Hospital. He noted that neither Ra's nor the League had been seen since the body of Ra's disappeared from Arkham City. At Elliot Memorial, Batman saw new members being trained by a member of the League. He learned that there were two factions of the League: the Loyalists and the Rebels. Batman learned that the Loyalists had returned to Gotham, in the hopes of resurrecting Ra's, who was gravely injured after Protocol 11. The Rebels wanted to ensure that the Demon's Head was never brought back. Batman was tasked by the Loyalists with finding a pure source of Lazarus chemicals to heal Ra's or else the war between the assassins would destroy Gotham City.

Batman used the Batmobile to track the source of Lazarus under Panessa Studios. After finding the last pool of Lazarus on Earth, he was attacked by the Rebels. After defeating them, he took a sample of Lazarus and attempted to destroy the rest with Explosive Gel. He was then stopped by the leader of the Rebels, Nyssa Raatko, Ra's al Ghul's second daughter. She wanted to take over the league to ensure that no more innocents would be hurt and she would force her assassins to leave the city forever. Nyssa then asked Batman to destroy her father's life support and let her take over.

When Batman returned to Elliot Memorial, Alfred tried to convince him to let the Demon's Head die. Batman contemplated his options while as he headed for Ra's life support. If Ra's were to die, the assassins would leave Gotham. If he did so, he would be breaking his no kill rule.

If Batman decides to give Ra's the Lazarus cure, he injects him with the last Lazarus on Earth. Then, the Rebels attack intent on killing Batman for betraying them. After Batman defeats all of the Rebels, he is attacked by Nyssa asking why he would help a man as evil as Ra's. Ra's returns to strength and accuses his daughter of being a traitor. He then slashes her stomach, leaving her to bleed out. Batman then attacks Ra's, but Ra's realizing he is still no where near 100% is able to steal one of Batman's Smoke Bombs and escapes to fully recover now that his strength has returned. Batman consoles Nyssa in her final moments. Alfred then tells Batman that he has averted war because it will take time for Ra's to heal and the Rebels have scattered with the Loyalists and Ra's leaving Gotham to hunt them down and to allow for more time for Ra's to heal to 100%. At GCPD, the Rebels are placed in holding cells and call the Dark Knight "traitor". Their weapons and uniforms are then placed in Evidence Room.

If Batman decides to destroy Ra's life support, he uses two Batarangs to destroy the machine, Then, the Loyalists attack intent on killing Batman for his betrayal. After Batman defeats the Loyalists, Ra's, barely alive, picks up a near by sword in an attempt to defend himself but is too weak and falls to the floor, unable to lift the weapon. He is then confronted by Nyssa, who is disgusted by what he has become. She attempts to kill her father, but she is stopped by Batman. She tells the Dark Knight that her father will die in a few days anyway. She fulfills her promise by taking control of the League of Assassins and leaves Gotham forever. Batman takes Ra's to the GCPD. After locking the former Master of Assassins away, Ra's thanks the "Detective" (Batman) that he is proud of him. After six centuries, the Demon's Head is ready to pass away peacefully. At GCPD, the Loyalists' weapons and uniforms are then placed in Evidence Room.

The members of the League of Assassins were fightable enemies. Most of them were female ninjas. They were rather difficult to knock out. They could use smoke teleportation to evade attacks. They attacked with swords, which could not be destroyed or separated from them. In Arkham City, their counterable attacks were quicker than normal thugs', as Batman could rarely successfully hit them while they were performing one with a normal strike without being hit, therefore the only way to deal with such attacks is to evade or to counter them; other characters, however, had higher success rates as they were quicker than Batman. Their uncounterable attacks could be dealt with a Blade Dodge Takedown, after four swipes rather than three like normal thugs'. Lastly, they dodged almost all of the projectile gadget attacks, except the REC which they could still be hit with sometimes.

In Knight, the League was no longer enemies fightable in challenge maps, because they were replaced by the Arkham Knight's or Penguin's Combat Experts. They could only be fought in the Shadow War story. They behave largely like Combat Experts, with additional counterable serial melee attacks, with which they would punch or kick Batman rather than slashing him with their swords. After successfully countering all the attacks of a ninja, Batman could then stun her and follow up with a Beatdown. The League was also shown to be recruiting male members ("initiates"); unlike the female ninja with swords, they simply behaved like regular henchmen.

The members of the League of Assassins appeared very similar to how they did in Arkham City. They wore almost identical outfits, with the addition of longer sleeves, a grey corset, and a red color scheme. They used smoke bombs to perform a teleportation-like move. Shiva was hinted at being the teacher of the League. They were armed with katana swords.

The members of the League of Assassins in Arkham City were Talia al Ghul's Elite Guards, who are all women, and dressed like the assassins that they were. They wore a bandanna-like covering on their lower face, as well as a shirt, tight pants, and boots. Also, the assassins carried a katana with a dark black casing which acted as their primary weapon. The assassins also used a smoke teleportation agent to escape direct/slow moves from Batman.

The League of Assassins

Talia and an assassin in the Chamber of the Demon in Wonder City. 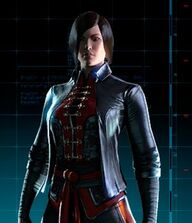 Deathstroke vs. Assassins in 100 to 1 Combat.

"You only continue to live because the great Ra's al Ghul allows it!"

"You should have listened to my warning. There are no friends to save you down here!" 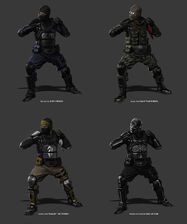 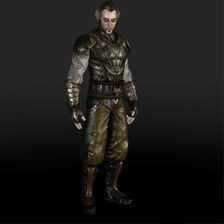 Ra's al Ghul: Founder and leader of the League of Assassins.