His early origins (Such as His birth, childhood, adolescence and how he came to work at Wayne Enterprises) are unknown but it very obvious that he acquired reputation in the business world and being a genius inventor/scientist, thus gaining the attention of Wayne Enterprises' former CEO, Thomas Wayne. Soon becoming a permanent position at the company, raising it to new heights with his innovations/“Midas Touch" on business, and became a close friend of Thomas Wayne, and eventually a close, important ally to his son Bruce Wayne, The Batman.

Lucius Fox is an extraordinarily intelligent, composed, diligent, dedicated and easygoing individual whose ability in technological advancement might surpass even that of Batman's. He retains a matter-of-fact perspective which allows him to properly observe a situation with accuracy and clarity, and further allows him to explain the complexity of various inventions in a laconic vocalization. Being a close friend to Batman; Lucius Fox is able crack jokes in deadpan and professional tone, the fact that Bruce trusts Lucius Fox enough with his identity adds a layer to his character: Trustworthiness.

According to Alfred, only he and Bruce knew the Batman's identity. Therefore, to get the parts that were needed to assemble the Batsuit and the gadgets from WayneTech, Bruce may have either taken them without asking Fox or just borrowed them.

In Arkham Asylum, the WayneTech security consoles were developed by Lucius Fox. Lucius Fox was mentioned after receiving the message to destroy the Titan Production Facility, and when the player upgraded the armor of his suit to the max.

Fox was mentioned when Batman requested the Grapnel Boost, where Alfred advised Bruce saying that it was still in the prototype stage and it was not ready for field deployment. But Batman still requested for it and it was successful in its use. In the Side Mission "Tea Party", Batman received a message from Alfred saying that Fox has manufactured the cure, where Batman discovered that it was truly a hallucination created by the Mad Hatter. Fox was hinted to have manufactured the cure for Gotham's citizens since Joker had shipped samples of his toxic blood to all of the Gotham hospitals and they needed the cure quickly.

Fox attended a Wayne Foundation presentation for a city renovation project which was hit by a daylight robbery. While calling for reinforcements, Fox was attacked by Harley Quinn who stole his Wayne Enterprises tablet PC and cut off his right forefinger to get past the biometric security. Lucius recovered quickly and accompanied Bruce to Germany to see Zimmer and inspect the new Batmobile. Lucius and Zimmer were both kidnapped by local criminals until they were saved by Batman.

Fox is the one who helped build the new Batmobile and Batman's final Batsuit which consisted of liquid armor that hardened on impact, allowing Batman to hit harder, Allowed his body to survive extreme G forces, and made him overall faster then ever before, now allowing for Batman to take down 3-5 armed people in close proximity in mere moments while dodging their gunfire. He was later taken hostage late into the incident by Hush, posing as Bruce Wayne, in order to access Wayne Enterprises' financials and frame Bruce Wayne with skimming funds from the company, although he was saved by Batman (also outing his secret identity to Hush by unmasking himself). If this was done after defeating Scarecrow, Batman/Bruce Wayne will also allude to Scarecrow unmasking Batman as Bruce Wayne on live television by mentioning if Lucius Fox hadn't seen the news and revealing that Batman is no more after this night.

After the "death" of Bruce Wayne and Batman, Lucius "owns everything" according to Nightwing. While it is unknown what that all entails it does, in fact, make Lucius the sole owner of Wayne Enterprises. Additionally, when Nightwing investigates the now broken Bat Symbol during GCPD Lockdown he asks Lucius why he didn't question Bruce when he wanted a detonation device installed into the Bat Symbol. Lucius replied Bruce wasn't a man you question and assumed he had a good reason for it, indicating he was out of the loop for the Knighfall Protocol. He proceeded to assist Nightwing in the same capacity as Oracle when he attempts to stop Penguin from escaping GCPD Lockup. After Nightwing restored power to the building, Lucius passed along news of the happily wedded Tim Drake and Barbara Gordon-Drake. Soon after, a group of Penguin's thugs land on the roof. Lucius obeyed Nightwing's instructions to turn out the lights, enabling him to get a jump on the thugs. During the fight, Lucius remotely hacked rooftop electronics and steam pumps to incapacitate the thugs. Ultimately, Nightwing was able to foil Penguin's escape. 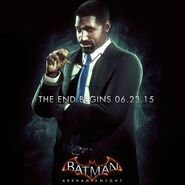