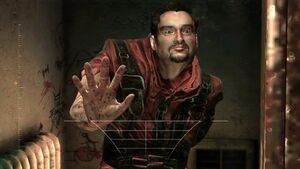 Luke Oliver is a Lunatic in Arkham Asylum pacing and muttering to himself inside his cell in the Arkham Penitentiary control room.

Unidentified by name, with the only other occupant in the room being Clayface, and later Quincy Sharp, Oliver is a hidden Easter Egg in the game Batman: Arkham Asylum.

Luke Oliver was a patient in Arkham Asylum. Where he was treated and the doctors tried to bring back his sanity.

Luke Oliver was present when Joker took control over Arkham Asylum. When the Lunatics got free from their cells. Luke was the only one who didn't got loose from his cell. Luke was later discovered by Batman. Luke remained in his cell for the rest of Joker takeover.

Luke was properly still in his cell. Later he was transferred to Arkham City in Hugo Strange's care after Arkham Asylum was closed down by Mayor Quincy Sharp.

Add a photo to this gallery

Retrieved from "https://arkhamcity.fandom.com/wiki/Luke_Oliver?oldid=87563"
Community content is available under CC-BY-SA unless otherwise noted.