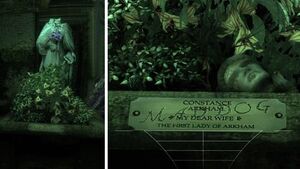 While not appearing visually in the game, Martin Hawkins was discribed via the Chronicles of Arkham and present via an etching on a plaque before a vandalized statue of Amadeus' wife, Constance Arkham.

From an early age, Martin Hawkins was beaten and sexually abused by his father. Hawkins grew up to become a disturbed man who cut himself in order to feel something. One day, as he was driven further into insanity, Hawkins claimed to see visions of the Virgin Mary, who told him to go out and kill women, by destroying their faces and sexual organs in order to "stop the dirty sluts from spreading their disease."

Hawkins killed many women before he was finally caught and sentenced to stay in the State Psychiatric Hospital in Metropolis. Once there, he was treated by Amadeus Arkham.

When Amadeus went back to Gotham City and set up Arkham Asylum, he went back home to find that Hawkins had somehow escaped the Asylum, had broken into his house and brutally murdered his wife and daughter.

Hawkins was captured again and sentenced to Arkham Asylum, where he underwent intense treatment under orders from Amadeus. Eventually, despite what he had robbed the man of. Hawkins managed to slowly win back Amadeus' confidence that he could be cured. Unfortunately, as soon as he was released, he used Arkham's pen to kill his secretary, revealing that he still did not change his ways (at some point after this, he went to the Botanical Gardens and vandalized a statue of Amadeus’s wife Constance, decapitating it). Amadeus, through with giving Martin second chances, had him permanently institutionalised, despite the latter's begging for mercy.

On the anniversary of his family's murder, Amadeus strapped Hawkins to a shock therapy table and fatally electrocuted him, and got revenge for the deaths of his wife and daughter. Hawkins' death was treated as an accident while Amadeus lost his own sanity and was admitted into his own asylum.