A deranged gang leader, Maxie Zeus came to believe himself an avatar of the Olympian god, Zeus. Creating a cult of gang members to do his bidding as he saw fit, Zeus became a power-player in the Gotham City Underworld. Zeus' criminal activities were perpetrated by his army of followers, and - he believed - were overseen by the Greek Gods themselves.

Maxie first believed that he was Zeus and became a criminal.

King Shark stumbled upon a possession of Maxie Zeus, while he was at Arkham Asylum with the Suicide Squad.

Maxie Zeus was one of the many villains to escape the asylum before the Joker's takeover. The others were: Calendar Man, Firefly, Black Mask, Ventriloquist, Tweedledum and Tweedledee, Ratcatcher, Riddler, Humpty Dumpty, Great White Shark, Killer Moth, Mr. Freeze, Penguin, and Catman.

During Joker's takeover of Arkham, Batman observed a cell with Greek symbols all over it, and that most likely being Zeus's. The cell could be found in the Patient Pacification Chamber at the Intensive Treatment Center. Zeus was nowhere to be found, so it was assumed that he was at large at that time.

Sometime after Joker's takeover of Arkham Asylum, and before Arkham City was opened, Maxie disappeared.

Although Maxie disappeared at Arkham Asylum after one too many rounds of electroshock therapy, his nightclub kept running in his absence, which lead some to think that he wasn't gone far at all. If Maxie was secretly dispatched to Arkham City, it was possible that he was killed during Protocol 10.

A Colosseum in the middle of Arkham City 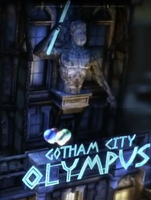